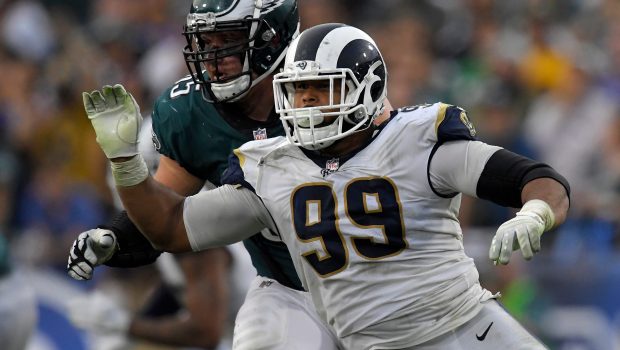 If you thought the Eagles’ offensive line was terrible yesterday — and it was since Carson Wentz was sacked eight times — you ain’t seen nothing yet.

Next up are the Los Angeles Rams, who beat the Dallas Cowboys last night, and with them Aaron Donald, who had a sack and four assists against Dak Prescott.

Sure, injuries, last-minute shuffling, youth, and inexperience contributed to the 27-17 WFT win over the Eagles at FedEx Field.

“Any time you disrupt your offensive line and lose some continuity there, it’s going to affect you a little bit, but the one thing I like about our guys is it’s a resilient group,” coach Doug Pederson said following his first defeat in a season opener.

The lack of continuity is a result of a litany of injuries that already had the Eagles searching for answers. Then on Sunday, Lane Johnson was inactive for the season opener due to a nagging ankle injury, making an already dire situation worse.

The results: 14 hits on quarterback Carson Wentz and only 57 yards on the ground. Regardless of the circumstances, it was not a banner day for the group.

“I felt like we were never really able to establish the run game very well,” center Jason Kelce said after the game. “That’s a combination of guys not executing. Credit to Washington of throwing some well-timed blitzes, but we got to be better. We got to be better up front. No excuses.”

“I think I’ve had plenty of work with the guys who were out there today and I don’t think anybody in particular played an individually terrible game,” he added. “That’s probably not what you guys want to hear, but I think everybody kind of had their chances to screw this one up. I think myself included. I could have played better, and I think everybody across the board had their moments where they could have got the job done better.”