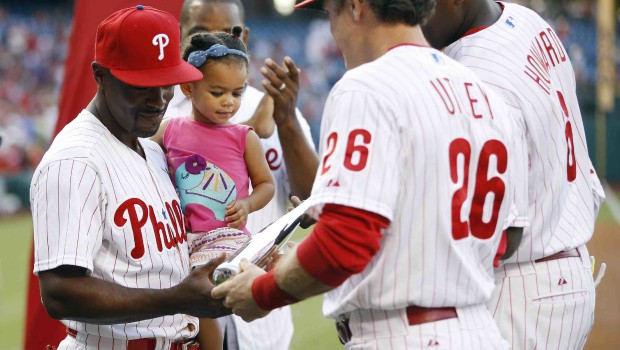 THE HILL FOR THE PHILS JUST GOT STEEPER

The Phillies have 20 games remaining before the All-Star break. They need to go 13-7 just to enter the break a game under .500.

It won’t be easy, as last night’s 4-0 loss to the Miami Marlins proved.

As Todd Zolecki of MLB.com points out, the Phillies’ rotation entered the night with a 2.70 ERA (27 earned runs in 90 innings) during a 9-4 stretch from June 10-22, which ranked seventh in baseball. The bullpen had been better. It had a 0.93 ERA (three earned runs in 29 innings) in that stretch, which was the best in baseball.

The pitching held true to form on Monday, until a sloppy ninth inning.

Phillies right-hander Roberto Hernandez allowed a two-run double to Casey McGehee in the first inning to score Derek Dietrich and Giancarlo Stanton to give the Marlins a 2-0 lead. But Hernandez allowed one more hit the rest of the way as he yielded three hits total, along with two runs, three walks and six strikeouts in six innings.

Mario Hollands threw 1 1/3 scoreless innings and Justin De Fratus worked out of a bases-loaded jam in the eighth to keep it a two-run game. De Fratus has not allowed a run in 13 innings over 13 appearances since being recalled on May 25.

But two errors in the ninth, including one from left-hander Antonio Bastardo, and a ball that dropped in front of Domonic Brown in left field led to two more Marlins runs.

But the Phillies’ offense? The most exciting thing came in the third when Hernandez singled to right field for the first hit of his career, snapping a 0-for-40 funk.

“Come on,” Hernandez said. “I’m happy, but I don’t think about the hit. I think about pitching.”

“I don’t know if it was pressing, today,” Ryan Howard said. “We hit a couple balls hard and we just didn’t get that hit today. Sometimes it just happens. I know it’s kind of gone off and on during the season, so it’s always going to be a situation or an issue. With what happened last week, how we’ve been playing, you’re going to have those days.”

Marlins right-hander Nathan Eovaldi allowed at least a hit in each of his first four innings, but the Phillies never really threatened other than putting runners on second and third with two outs in the fourth. He allowed six hits in 6 1/3 scoreless innings.

Cody Asche picked up his third hit of the game in the seventh, which forced Eovaldi from the game. Left-hander Mike Dunn faced Brown, who grounded out to third for the second out as Asche advanced to second. Pinch-hitter John Mayberry Jr. stepped to the plate, but the Marlins countered with right-hander A.J. Ramos.

Mayberry struck out swinging to end the inning.