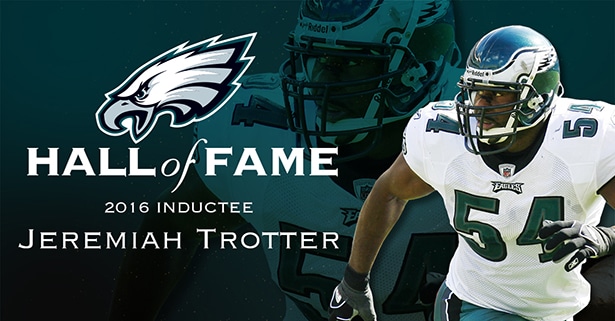 November 28 will be a green letter night for Eagles fans.

Former All-Pro linebacker Jeremiah Trotter and longtime play-by-play announcer Merrill Reese will be inducted into the Eagles Hall of Fame on November 28, when the team hosts the Green Bay Packers on Monday Night Football.

Considered the “pulse” of Philadelphia’s dominant defense in the early 2000s, Trotter helped guide the team to three NFC East crowns and five playoff appearances, including two NFC Championship Games and a berth in Super Bowl XXXIX. He recorded five 150-plus-tackle seasons with the Eagles, leading the team with 202 tackles in his first full season as a starting middle linebacker in 1999. Trotter went on to anchor three Philadelphia units that ranked among the NFL’s top-five defenses in fewest points allowed (2000-01, 2004).

Originally selected by Philadelphia in the third round (72nd overall) of the 1998 NFL Draft, the Texarkana, Texas native was a consensus All-American and All-Southland Conference honoree at Stephen F. Austin State University.

Gifted with an unforgettable sound and style that has become synonymous with the franchise’s rich history, Reese is the longest-tenured play-by-play announcer in the NFL as he now enters his 40th season as the Voice of the Eagles. Since his first call from the radio booth in 1977, Reese has inspired generations of Eagles fans, earning local and national recognition as a premier sports broadcaster.

A graduate of Overbrook High School and Temple University, Reese, who resides in Blue Bell, Pennsylvania with his wife, Cindy, began his career as a public affairs officer in the United States Navy and started in the radio business at WPAZ in Pottstown, Pennsylvania following active duty.