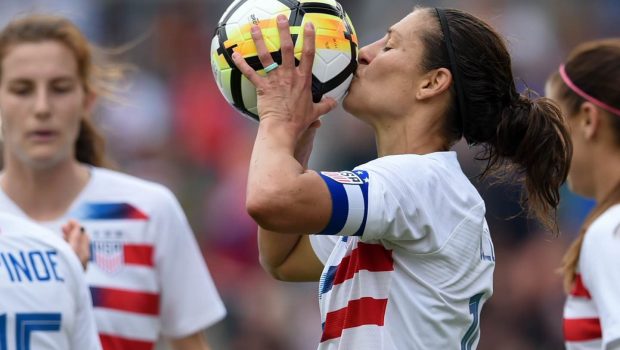 THE GREAT CARLI LLOYD, JERSEY GIRL THROUGH AND THROUGH, RETIRES!

The Delran, NJ, native will retire from international play after the USWNT fall friendlies and from club play at end of the NWSL season.

Lloyd, 39, had hinted at her retirement following the Olympics. She will do a farewell tour for U.S. Soccer, playing in two USWNT friendlies in September and two in October, which will serve as her final games in a USWNT uniform.

She will also finish out the rest of the National Women’s Soccer League season with her club, NJ/NY Gotham FC, before also calling time on her 12-year, six-club career.

Lloyd scored the last of her 128 international goals when she netted a brace in the United States’ 4-3 defeat of Australia in the bronze-medal match at the Tokyo Olympics.

Her 312 international caps rank her second all time in the U.S. and in the world behind only Kristine Lilly (354). Lloyd is one of just four international soccer players to play 300 or more times for her country.

“When I first started out with the national team in 2005, my two main goals were to be the most complete soccer player I could be and to help the team win championships.” Lloyd said in a news release. “Every single day I stepped out onto the field, I played as if it was my last game. I never wanted to take anything for granted, especially knowing how hard it is to get to the top, but even harder to stay at the top for so long.”

Her 128 career international goals are fourth most in USWNT history. She holds the team record for most Olympic goals (10) and is third in team history for most WWC goals (also 10). Lloyd is also tied with Mia Hamm for most USWNT hat tricks with eight.

Lloyd began her career a few days before she turned 23 when she debuted against Ukraine in Portland, Oregon.

“I am thankful for all five head coaches I have played for, as they have all helped mold me into the player I have become over the years,” Lloyd said. “We shared some amazing moments and also some challenging moments, but all of it is what has made my journey so special and rewarding.”

Carli Lloyd has announced her retirement.

She will finish the season for the @NWSL's @GothamFC, and four friendlies for the @USWNT. What a career it has been. pic.twitter.com/zBrNU3O5zR