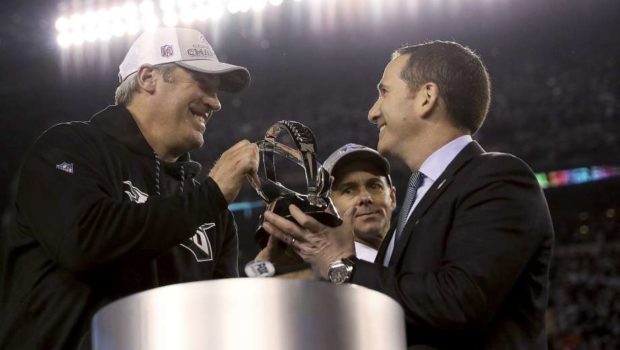 THE EAGLES HOWIE AND DOUGIE SHOW NEEDS TO BE REPLACED!

Three seasons ago the Eagles were the best team in the National Football League.

But Not For Long, which is the most reliable maxim in sports.

Big boss Howie Roseman and coach Doug Pederson were hailed as sun kings by Eagles fans and much of the sports media nationally.

They could do nothing wrong.

Now it seems they can nothing right.

And Pederson and Roseman are on the hot seat.

It’s getting hotter after an 0-2 start that should have been 2-0.

And it’s time for Eagles owner Jeff Lurie to cut his losses and replace both of them.

Pederson’s offense has lacked the creativity and explosiveness of their run to the Super Bowl.

Some of this could be tied to the fact that the co-architects of the attack, then-offensive coordinator Frank Reich and then-quarterbacks coach John DeFilippo, have both moved on to other jobs.

Carson Wentz was injured during the title run, and Nick Foles led Philly to the Lombardi Trophy. Prior to getting hurt, Wentz played at a MVP level, and team officials have said they believe he can recapture that form. He has yet to prove he can stay healthy long enough to do so, however.

But all of the Eagles’ struggles can’t be pinned on Wentz. Another factor in this 0-2 start involves the talent around him.

The Eagles’ offensive line is aging and has been plagued by injury. His wide receivers are either young and inconsistent or declining in effectiveness. Wentz does have tight ends Zach Ertz and Dallas Goedert at his disposal, but the quarterback’s uneven play has proven costly, as he has missed them on key throws.

The Eagles’ problems also extend to the defense, where their top linemen no longer appear to be in top form. And the free agency departure of Malcolm Jenkins robbed the unit of a valuable leader and field general.

Philly’s defense played like a unit sorely lacking in discipline on Sunday. The Rams attacked them with frequent misdirection plays. Each time, the Eagles’ defenders bit hard and were caught out of place, yielding big gains through the air and on the ground.

Safety Rodney McLeod dismissed the notion that he and his teammates were ill-prepared, however, and said that the Rams’ game plan was “identical” to what the Eagles practiced for.

If that’s the case, the defense’s poor execution is even more troubling.

It wasn’t long ago that the Eagles and Rams found themselves in similar positions on their football journeys. Both had rebuilt their rosters around young quarterbacks (Goff went first overall in 2016 to the Rams one pick before Wentz). Both became relevant in their divisions and began to consistently make the playoffs.

Now both are fighting to remain competitive in an ever-changing league.

The Rams have managed to retool on the fly while replacing over-the-hill stars with smart draft picks and blockbuster acquisitions. The Eagles, meanwhile, are starting to show signs that they could soon fall victim to age and ineffective draft classes.

There’s no quick fix to many of the Eagles’ problems. Many roster upgrades must take place in the coming offseason to compensate for missed opportunities this spring.

Given the physical and mental gifts that he has displayed in years past, Wentz should be able to spur some sort of a turnaround.

But as was the case during their run to the Super Bowl, the Eagles will need familiar faces to provide meaningful and consistent contributions as well rather than leaving the quarterback to shoulder the load.

Pederson said as such yesterday.

“For us, it’s a matter of continuing to work. I think as coaches and players, we continue to strive to get better every single day,” he said. “I just don’t want Carson to feel like he has to make all the plays every single time. I want him to just be Carson. … He wants to do everything right, and we’ve given him control to do that, but we just have to continue to work to get better.”