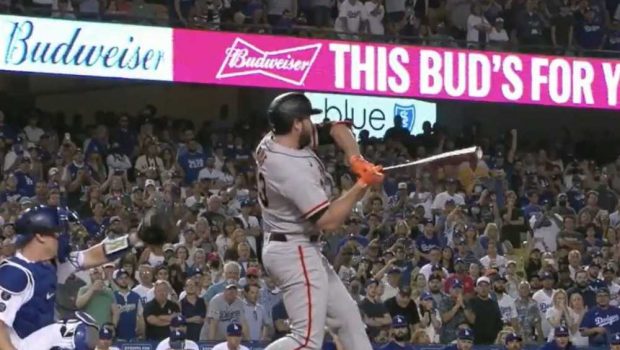 THE DODGERS BOUNCED THE GIANTS ON THIS STUNNINGLY BAD CALL!

In the fifth and deciding game of the National League Division Series, the Dodgers sliced and slashed their way to a ninth-inning run to capture a 2-1 victory and series win.

Cody Bellinger’s last-gasp slashing single to right field with one out in the ninth. It scored Justin Turner with the eventual winning run. Bellinger pointed into the jubilant Dodgers dugout all the way to first base. He knew, and they knew.

Max Scherzer, who took the mound in the bottom of the ninth in relief and survived the Giants, ending the game on a controversial strikeout of Wilmer Flores with Kris Bryant on first base, bringing the Dodgers dancing out of their dugout.

Replays show that Flores clearly checked his swing on an 0-and-2 pitch, but first-base umpire Gabe Morales saw otherwise, called him out, ending the tumultuous series in turmoil.

The moment the @Dodgers took down their rival in Game 5 to advance to the NLCS! #Postseason pic.twitter.com/CNpp3H7Qz3