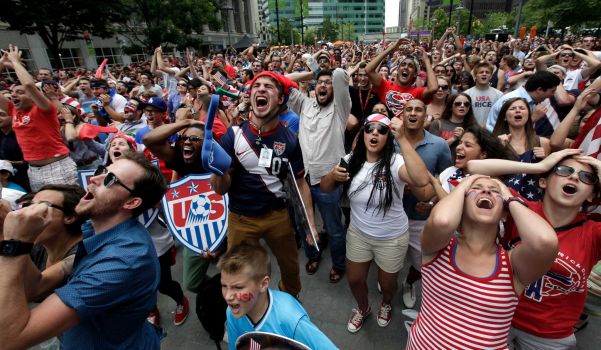 There was a time when the United States soccer team couldn’t win for losing.

So, yesterday the Yanks tried the opposite, and they backed into the World Cup round of 16, advancing ahead of Portugal despite a 1-0 loss to Germany.

But as big as the result on the field was, the first time the Americans have made it out of the group stage in consecutive World Cups, it was dwarfed in importance by the reaction off of it.

Just as countries in Europe and South America have for decades, the United States came to a standstill for two hours, diehard fans and bandwagon jumpers alike glued to the game against Germany.

Never mind that it was the middle of the workday. Companies rolled TVs into conference rooms and ordered in lunch. Fans from one coast to the other packed parks, squares, streets and bars — anywhere with a screen and a signal.

The governor of New York even gave state employees an extra hour for lunch so they could watch the game guilt-free.

“We’re catching up to the rest of the world,” defender Omar Gonzalez said.

For the first time, the U.S. is finally — and fully — a soccer nation.

“It’s extraordinary. That we get to continue this ride for another week, and hopefully longer, is huge for the sport,” U.S. Soccer Federation president Sunil Gulati said.

“It translates into more fans, more casual fans and more kids that could turn on the sport and may turn out to want to play,” Gulati said. “Every game we play, I’m not going to say it’s a bonus because we want to go a long way, but it’s surely a big plus in terms of all those things that we want to be positive.”

Despite the rantings of a few deluded folks — this means you, Ann Coulter — soccer’s popularity has been on a steady and irreversible climb, growing out of seeds planted by the U.S. hosting the World Cup in 1994 and the women winning the title at the Rose Bowl five years later.

Major League Soccer is thriving, and Americans stopped being a novelty act in Europe more than a decade ago. The top international teams draw sell-out crowds for U.S. exhibitions even when they field their B teams, and interest in the European leagues is so great you can now watch every English Premier League game live — something not even possible in England.

And, perhaps most telling, a 2012 poll by social scientist Rich Luker found that soccer was the second-most popular sport for Americans ages 12 to 24, trailing only the NFL.

But it’s one thing to be popular. It’s another to be so entrenched in the fabric of U.S. sports that everyone has a passing knowledge of the game, enough to know their Tim Howards from their Dwight Howards.

Which is why this World Cup is so important.

Once again, aside from the host, there are more Americans at the World Cup than fans from any other country. But these folks are already diehard fans. You don’t spend the time and effort — not to mention the money — to come all this way for a game you’re not wildly passionate about.

No, it’s the folks back home that U.S. Soccer was hoping to captivate. People who’ve never watched a game, or paid attention beyond their kids’ weekend games. People who are turned off by the growing awareness of football’s health risks. People who happily jump on the bandwagon any time they see athletes with U-S-A on their chests.

People who can help grow the game so the U.S. will, someday soon, have a realistic chance at winning the World Cup.

But this, this isn’t just a bump in popularity. It’s a seismic shift.

Whether it’s the U.S. defying expectations to advance from the Group of Death, the drama of each of the three games or the charisma of coach Jurgen Klinsmann, America is following the World Cup with the same fervor as fans in the hotbeds of Europe or South America.

“We don’t know the real extent of it all, because we’re in this little bubble,” defender Matt Besler said. “But what we do see … it gives us chills.”

Boston’s mayor was among the throng that gathered outside City Hall to watch the game on a big screen.

For those who couldn’t get away from work, companies held viewing parties in conference rooms and board rooms, or streamed the game during meetings. President Barack Obama, on his way to Minnesota, had the game shown on Air Force One.

One person even Tweeted a photo from his dentist’s office, where a TV was situated so he could watch the game while he got cavities filled.

And when the game ended, so many fans flooded the streets in New York City that several had to be shut down.

“It is, frankly, everything those of us who have been involved in the game for a long time would dream of,” Gulati said.

Some of the frenzy will fade after the World Cup, it always does. But there’s been too much interest, too much enthusiasm for there not to be a lasting effect.

The score line Thursday said differently, but this was a day U.S. soccer won. ​