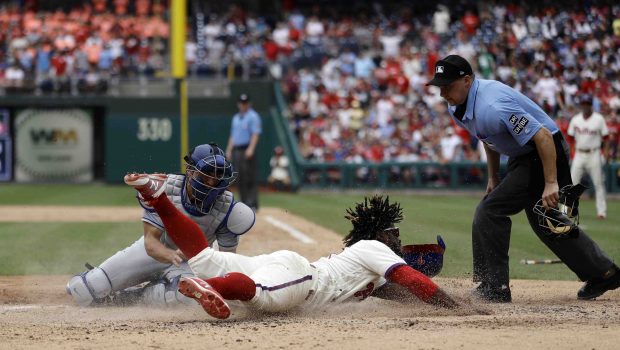 The Phillies and Dodgers worked at their day jobs less than 12 hours after they finished last night’s 5-hour, 55-minute marathon, and the Phills were the big winners ate CBP.

They scored five runs in the fifth inning, chasing Walker Buehler, and went on to a 7-3 and series win.

The series finale at Citizens Bank Park started a little over 11 hours after last night’s 16-inning marathon ended, leaving the Dodgers’ pitching staff taxed and manager Dave Roberts hoping for more from Buehler in his first start since July 13.

Buehler gave up a first inning home run to Rhys Hoskins but retired 11 of the next 12 batters.

With one out in the fifth, Scott Kingery took Buehler deep. Jesmuel Valentin followed with a single. After Jake Arrieta’s sacrifice bunt attempt failed for the second out of the inning, Andrew Knapp doubled to score Valentin.

Buehler intentionally walked Hoskins before being pulled from the game. Reliever Scott Alexander walked Odubel Herrera to load the bases then gave up a triple to Carlos Santana that cleared them, the third run just beating an outstanding relay throw from Kike’ Hernandez.

That gave the Phillies a 6-1 lead. After going scoreless over the final 10 innings Tuesday, the Dodgers managed just one run in the first five innings against Arrieta. Max Muncy made it closer with a two-run home run in the sixth, his 24th of the season.

The Dodgers came within a few feet of tying the game in the top of the eighth. With two outs and runners on first and third, Alex Verdugo launched a drive to straightaway center field that settled into Phillies centerfielder Odubel Herrera’s glove just in front of the wall 401 feet away.

The Phillies gave closer Seranthony Dominguez a little cushion with a run in the bottom of the eighth on a bloop RBI single by Nick Williams.