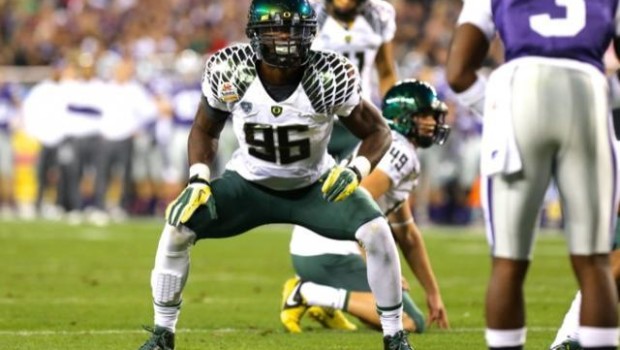 BRANDON GRAHAM-FOR-DION JORDAN MAY NOT BE DEAD

The draft is behind them, but the Eagles may not be done adding to their roster, including the earlier rumored Brandon Graham trade for the Dolphins’ Dion Jordan (above photo)

According to NFL.com’s Don Wesseling, it’s not unusual for a training camp trade to go down.

Brandon Graham, DE/LB, Eagles: Finally healthy in 2012, Graham showed promise as a disruptive pass rusher only to be held to under 30 percent of the defensive snaps in Billy Davis’ ill-fitting 3-4 defense last season. The 2010 first-round draft pick has the talent to be a bargain pickup for a team with a 4-3 defense. The Eagles have been open to moving Graham for quite awhile now.

Dion Jordan, DE/LB, Dolphins:Jordan has been connected to Graham in trade talks that reportedly went nowhere between the Eagles and Dolphins. Whether it’s true or not, there is persistent speculation in league circles that Jordan is available for the right price because new general manager Dennis Hickey doesn’t value him nearly as high as former boss Jeff Ireland did. It doesn’t help that Jordan remains without an obvious position in the Dolphins‘ 4-3 defense.

LaMichael James, RB, 49ers: Left out of the 49ers‘ running back rotation even before the arrivals of Carlos Hyde and a relatively healthy Marcus Lattimore, James has seemingly been on the trading block for a year now. We suspect he hasn’t been moved because no team is willing to part with a mid- to late-round draft pick for an underwhelming scatback. He did star at Oregon under Eagles coach Chip Kelly.