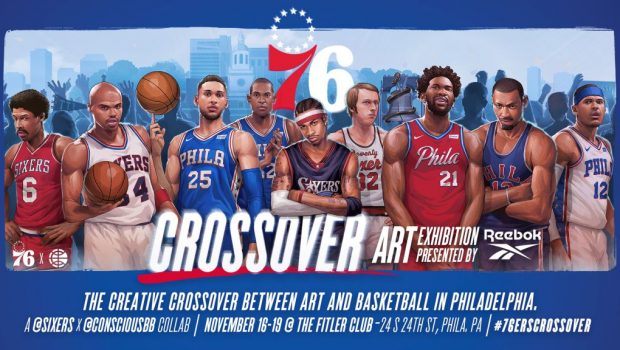 THE AUDACITY OF HOOP: SIXERS ART ON DISPLAY AT FITLER CLUB!

Sixers junkies don’t have to wait until their next home game tomorrow afternoon against the Cavs to get a fix.

The team’s intriguing history — from 1963 when they came down from Syracuse to fill the void the Warriors left when they moved to San Francisco to today’s social media darlings — is on display at the brand-spanking new Fitler Club at 24th and Market Sts.

Starting today and running through Tuesday, the Sixers are partnering with Reebok to host the “76ers Crossover: Art Exhibition, presented by Reebok,” a free four-day event.

More than 200 pieces of artwork by artists from 13 different countries focused on the crossover between basketball, art and Philly, the hottest hotbed of the audacity of hoop, the multi-day event will illustrate the history of Sixers basketball – from Wilt Chamberlain to Allen Iverson to the 2019-2020 squad.

To curate the artwork on display at the Fitler Club, the Sixers enlisted Conscious Basketball, an art company that produces basketball-related art.

Roughly 20,000 attendees are expected at the four-day occasion. Visitors will not only be able to view the displayed art, but they will also have the opportunity to see Reebok live-paint all-white Reebok classics.

At the art exhibition, fans will also be able to participate in a silent auction via the 76ers mobile app. On there, they can bid on exclusive items like a specially painted Red Bull cooler as well as a rare series of 2017-2018 City Edition jerseys. Those shirts will serve as canvases for local artists to display creative designs curated by Peopledelphia’s – a Philly-centric Instagram account that posts about the city’s diverse culture.

“The NBA is really a superstar league,” Dorset added. “Although that’s something that’s publicly known and publicly accepted, we often find these cases where you’ll find the player that’s into art, music, or fashion. And the public – and I find myself in that same realm – we’re like, really?”