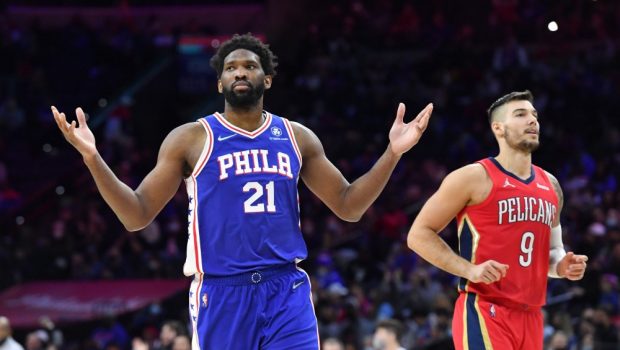 THE AMAZING JOJO IS AVERAGING 33.3 PER IN SIXERS LAST 19 GAMES!

Joel Embiid drained 12 of his 42 points in the fourth quarter and the Sixers dusted off the New Orleans Pelicans 117-107.

Tobias Harris added 33 points for the 76ers, who opened a five-game homestand by winning the 12th of their last 15.

“His dominance is huge for us,” Harris said of Embiid.

Embiid is averaging 33.3 points per game over the last 19.

“That was one of my goals, just to be available,” Embiid said. “Don’t plan on stopping.”

In addition to Zion Williamson, who has been out all season while rehabbing his injured foot, the Pelicans were missing starters Devonte’ Graham (left ankle soreness), Josh Hart (left ankle), Brandon Ingram (right ankle sprain) and Jonas Valenciunas (rest).

Nickeil Alexander-Walker scored 31 points and Willy Hernangómez had 29 for the Pelicans.

Embiid took over during crunch time in the fourth.

The Sixers were clinging to a 97-95 lead when he re-entered with 7:40 remaining. Harris converted a free throw, finishing a three-point play, to make it 98-95. Then Embiid scored all of Philadelphia’s points during a decisive 10-3 run. His two free throws with 4:03 to play made it 108-98.

That was too much for the Pelicans to overcome.

Embiid’s mentality in the fourth?

New Orleans surprisingly jumped on the 76ers early and kept the momentum throughout an impressive first half. The Pelicans’ lead was 33-23 after Gary Clark’s 3 with 9:12 left in the half and reached 10 again on Alexander-Walker’s 3 with 1:29 remaining. New Orleans was ahead 58-50 at the break.

The 76ers — and Embiid, especially — made it tougher after the break.

“Just being aggressive,” he said, “because in the first half everything was easy for them.”