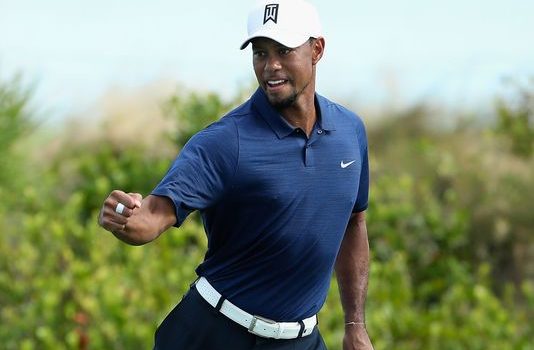 THAT’S MORE LIKE IT! TIGER’S 2ND ROUND A BLAST FROM THE PAST

Flashes of Tiger Woods’ brilliance were on display in Thursday’s first round of the Hero World Challenge at Albany Golf Club in the Bahamas before he faltered down the stretch and shot 1-over-par 73.

Far more brilliance paraded around the course in yesterday’s second round when Woods was Woods again.

He had control of his swing, his trajectory, his distance. His power off the tee was there, his touch on the greens too. And his hallmark recovery shots had onlookers shaking their heads, no more so than on the eighth when he flopped a shot from deep sand and over tall grass to six feet to save par. Or on the 16th when he drove into another collection of bushes yet saved par with a 25-footer he punctuated with multiple fist pumps piercing the air.

Playing solo because Justin Rose pulled out with a bad back, Woods didn’t have a single bogey on his card and shot 65 in a shade under three hours. Yes, the course has five par-5s and there was hardly a hint of wind, but a 65 is a 65, and it’s a remarkable 65 considering he hadn’t hit a shot in a competitive round in 466 days when he stepped to the first tee for the first round.

“As I said yesterday, I had it going for eight holes and I lost it,” said Woods, who is ranked No. 898 in the world. “Today was different. … It was nice to get that first round out of the way, to get back into it again. Today I think that also making some of those putts and those two birdies at 9 and 11 changes the entire energy of the round and instead of being angry at myself and ticked and trying to fight back, now I’m building momentum.

“ … I really had it dialed in both ways. I was working it both ways and I really had nice control of my trajectory. That was key. I was able to keep the ball down when I needed to and send it at times.”

With plenty to choose from, Woods was most pleased that he kept his card clean of bogeys, grinding when he had to among the palm trees and remaining focused at all times. After his remarkable par on the eighth, he turned to his caddie, Joey LaCava, and declared, “I’m not dropping a shot today.”

“Somehow, I don’t know what it is about playing and competing, but keeping cards clean, there’s something really special and it feels pretty good about doing that,” he said.

He’s feeling good about a lot of things these days. The continued growth of his two children, his growing foundation and business interests, his health. And he’s beaming about being back on the golf course contending again, back among his peers in the locker room, back moving the needle again.

And he knows — his troublesome back permitting — there are better days ahead on the golf course.

“I’m still learning some of my equipment,” said Woods, who has switched to the TaylorMade M2 driver and M1 fairway metals and to a Bridgestone golf ball. “My irons are old irons, don’t have to worry about that. I’m still learning my fairway woods. I’m still learning the golf ball. I haven’t been at it that long yet, and as I’ve told you guys this week, this is the first time I’ve ever played non‑glued hosels before, so the adjustability thing and the weight in the hosel and the weight distribution throughout the clubhead, it’s a different mechanical thing and it’s also a different feel thing, too. I’m hitting shots and numbers that are surprisingly bad and surprisingly good, and I have to do a lot more testing in the future before I actually do feel comfortable.”

He looked mighty comfortable in the second round. While he has to go low today and tomorrow, just being in the heat again, being within reach of victory again, has Woods — and the golf world — smiling again.