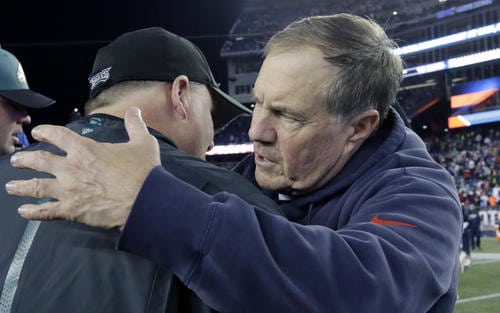 Eagles’ coach Chip Kelly (left) should thanks his pal Bill Belichick for the bizarre drop-kick that the Eagles recovered.

Even a great coach like the Patriots’ Bill Belichick can have a brain fart!

How else to explain the pooch kick that he tried with a 14-0 lead that failed miserably and let the Eagles back into the game to ultimately win 35-28:

A drop-kick from Nate Ebner midway through the second quarter, with the Patriots leading by a pair of touchdowns and the Eagles struggling to get going offensively.

Sevi Ajirotutu — remembering the Patriots pulled a similar trick when they led the Redskins early last month — and his “heightened awareness,” as he put it, fielded the onside kick cleanly, giving the Eagles good field position to set up their first touchdown.

It was the first in a series of significant and — when taken together, one after another after another, all in the same game — unusual plays the Eagles parlayed into a win against the Patriots, 35-28, at Gillette Stadium on Sunday.

“It’s not something you expect,” Ajirotutu said, accurately describing a rare drop-kick, from a defensive back/special teamer. “But with the Patriots, you can expect the unexpected.

“It turned out to be stupid on their part, in a sense, because it just gave us better field position. I understand if they got it back, OK, it would have potentially been 21-0.”

Ajirotutu trailed off with a shrug and a smile. That play could have gone either way. The Patriots took a risk, and the Eagles made a play.

The next big play came in the waning seconds of the second quarter. Chris Maragos blocked Ryan Allen’s punt, and Najee Goode returned it 24 yards for a touchdown and a tie game, 14-14.

Then came Malcolm Jenkins’s 99-yard interception return midway through the third quarter. It was, in part, again the result of the Eagles doing their homework. Patriots running back James White took a pass to the Philly 1 three plays prior. New England hurried the next play — similar to the way it did against Buffalo near the goal line two weeks ago, catching the Bills way offside — but this time White got dropped for a 4-yard loss.

“If [Tom Brady] feels like the defense is slow to get back, he will hurry up to the offense and they run the same play most of the time,” Jenkins said. “They try to get a quick run and catch you off guard, no matter what the personnel is, and so we were prepared for that.”

At the end of the next drive, as the Patriots stalled out in their own territory, Darren Sproles returned a punt 83 yards for another score.

Allen’s boot was a line drive, Sproles explained, which gave the returner a moment to assess what was in front of him. Maragos gave him his first block — which was really just a light shoulder, getting in between Sproles and Ebner — and Sproles took off down the sideline.

The Eagles’ final touchdown came after cornerback Byron Maxwell picked Brady off in the end zone a few minutes later, one of several deep, unsuccessful, and seemingly desperate heaves from the Patriots quarterback.

“It takes those things to win in this stadium against that coach and that quarterback,” Philadelphia coach Chip Kelly said.

How unusual it was for the Patriots to lose this game — playing at home, coming off a loss — was not lost on the Eagles. Ajirotutu was excited to beat the Patriots for the first time in his six-year career. Tackle Lane Johnson suggested the Eagles might have taken everything a bit more seriously this week, with the Patriots being among the top teams in the league.

“This is a big win for us,” Sproles said of an Eagles team that, even at 5-7, is in the NFC East discussion. “To get this win here and against a great team like this is big for us.”