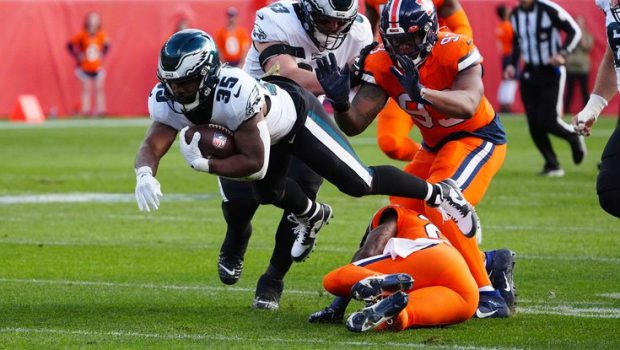 The Eagles rookie head coach Nick Sirianni spent this season’s first seven games with his head up his ass:

He ignored the running game, with the exception of Jalen Hurts running for his life.

Then, as if it were a miracle, Sirianni flipped the script.

They have a new smash-mouth identity over the last three weeks―and that style could be here to stay.

Then, on Sunday, Philly showed that neither of those two games were matchup-specific outliers, galloping to 214 rushing yards on 40 totes in a dominant 30-13 win over the Broncos on Sunday.

Philly split the workload between its two main backs in the win, with Jordan Howard (12 carries, 83 yards) leading the way and Boston Scott providing a speedy change of pace option (11 carries, 81 yards). Hurts did his typical thing too, mixing scrambles and read-option looks en route to 14 carries for 53 yards of his own. The team’s success on the ground helped open things up down the field for Hurts, who finished an efficient 16-of-23 for 178 yards with two touchdowns and a pick, a stat line that would’ve been better if not for a bad end zone drop by Quez Watkins just before the half. All in all, the Eagles dominated time of possession (34:58 to 25:02), mostly took care of the football, and executed on third down (converting on six of 13 tries).
This style of offense makes so much more sense for an offense helmed by a young quarterback like Hurts, who can function as a force multiplier for his team’s run game because of his ability to pick up chunk yards with his legs. Critically, the balanced tack has effectively taken pressure off of Hurts to carry the team with his arm, which would’ve been a tall order for any second-year quarterback with a shallow receiving corps outside DeVonta Smith (who finished with four catches for 66 yards and two touchdowns). The proof has been in the pudding the last three weeks: As The Athletic’s Sheil Kapadia points out, the Eagles rank first in Expected Points Added (EPA) per drive and actual points per drive (3.23) over the last three weeks, and they rank second in points per game in that stretch (28.0).
The Eagles sit at 4-6, still outside the NFC playoff picture. But with continued strong play from this offense, Philly could make a run down the stretch. They’ve got a tough matchup with New Orleans next week, but from Week 12 on, they draw matchups against the Jets, the Giants twice, and the Washington Football Team twice before finishing up their year against the Cowboys. There’s plenty of winnable games in there, and it won’t be a huge surprise if the Eagles emerge as a dark-horse playoff team.
Click Here To Comment
0 admin November 17, 2021 Eagles