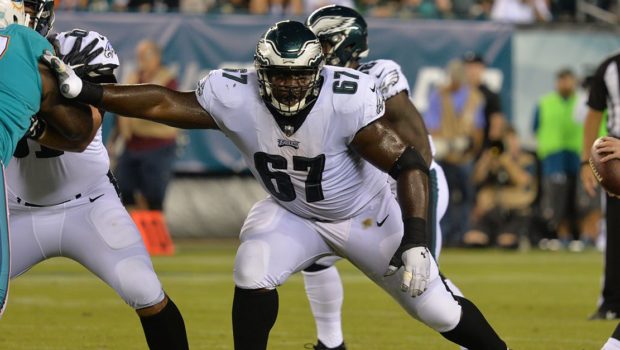 The Eagles haven’t made it official but probably will be by Friday:

That’s the obvious conclusion one must come to after Warmack was given most of the first-team reps in yesterday’s practice.

Eagles coach Doug Pederson on Monday said he was sticking with Seumalo after the second-year player struggled for a second straight week in a 27-20 loss at Kansas City.

Warmack, who wasn’t active for Sunday’s loss, is being given the promotion over reserve guard/center Stefen Wisniewski.

Seumalo, their third-round pick in last year’s draft, had been the starting left guard since training camp began.

Seumalo struggled the most of any Eagle during Sunday’s game, giving up three of the Chiefs’ six sacks of Carson Wentz.

“I’m here to do whatever they need me to do,” Warmack said. “I’ve been going on both sides, so you just don’t know what’s going to happen.”

Warmack was a first-round pick of the Tennessee Titans in 2013 and started from Week 1. But he lost his way with the Titans last season, when he was also injured.

“The more you stay in the same system,” the better you’re going to get,” Warmack said. “You’re never perfect, but you want to strive to be, but you just constantly keep beating on the same things over and over and try to execute those things and try to get better.”

Right tackle Lane Johnson said he couldn’t officially comment on any change, but he did detail how Warmack has worked to improve since joining the Eagles as a free agent in the offseason.

“He’s been consistently working, trying to get better with his hands, his leverage,” Johnson said. “He’s been practicing hard and battling all year. So when this opportunity comes, he’ll be ready.”