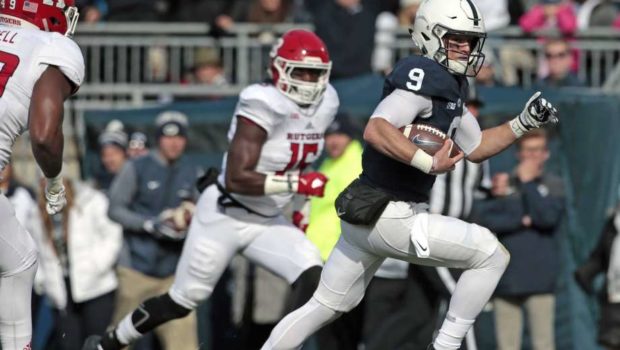 McSorley became Penn State’s all-time touchdown leader with 68, overtaking Daryll Clark’s record of 65 with one rushing and two passing scores, and the Nittany Lions scored 35 unanswered points after going down 6-0 in the first quarter.

Rutgers (4-6, 3-4) got a pair of field goals from Andrew Harte, including one from 33 yards after the Scarlet Knights recovered the opening kickoff. He added a 25-yarder to give Rutgers a 6-0 lead with 11:16 to play in the first quarter, but Rutgers’ momentum ended there.

The Scarlet Knights didn’t get a first down in the second half until their final drive, which ended in a turnover on downs.

Robert Martin led Rutgers with 71 yards on 11 carries. Giovanni Rescigno completed 7 of 20 passes for 43 yards for the Scarlet Knights.

The Scarlet Knights pounded the ball and Rescigno showed off some scrambling ability to give Rutgers its best shot early on.

Three games ago, Penn State was sitting at No. 2 and had a clear path to the playoff with a bona fide Heisman Trophy front-runner in Barkley leading the offense.

With two losses and one shaky start later, Penn State can’t get Barkley going on the ground, and his Heisman chances are becoming slimmer.