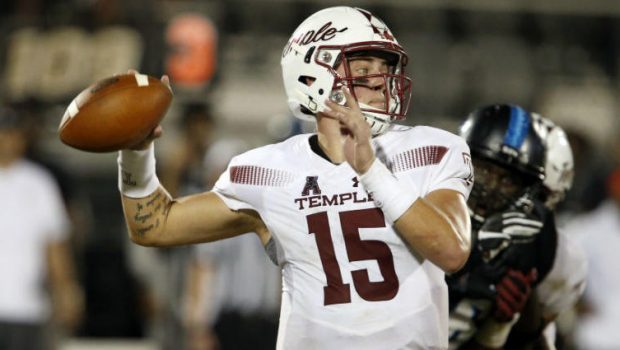 Redshirt junior quarterback Anthony Russo is coming off an outstanding 2018 season, and he practiced yesterday after missing a lot of time with a calf injury.

“He practiced (Monday), which was good,” he said. “Now, it was a lighter practice, so we kind of thought he would get through the whole thing, and he did. He was sharp and it doesn’t look like the injury is bothering him at all. So they’re all positive signs. Now we have to see how he reacts. You know, it’s his first full practice in a couple of weeks. See if he’s sore, come back (Tuesday) and see how he feels with that. Then we’ll have a lot of information probably after (Tuesday) leading into Wednesday to see what decision we can make.”

Redshirt sophomore Todd Centeio is set to play if Russo is unable to go in the opener.

The Owls are coming off an 8-5 2018 season (7-1 in the American Athletic Conference) that saw them play in a bowl game (Independence) for a fourth straight year.

Carey talked about what he likes about his 2019 team.

“I’m hoping, as you look at it today, that our linebackers are a strength,” he said, “which I think they have an opportunity to be. That our o-line up the middle is our strength, which I think they have an opportunity to be. Certainly, right through the middle of our team, that quarterback, o-line, inside tackles, the linebackers and then the safeties. I think those are the groups that I look to be a strength. Now all that being said, I think we have some special wide receivers as well and I’m really excited to see them go out and execute at the rate they have been at practice.”

Temple and Bucknell get underway Saturday at 3 p.m.