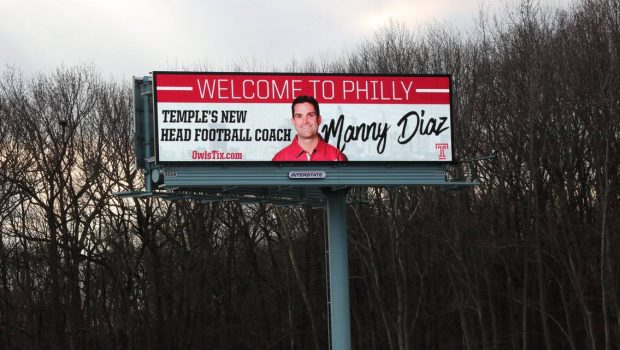 Diaz’s father, Manny Sr., served as Miami’s mayor for eight years and told the Miami Herald he is thrilled at his son’s new position.

The former mayor, who did not attend his son’s introduction in Philly, emailed a photo to the Miami Herald of a giant, red and white billboard on I-295 in Philadelphia that read WELCOME TO PHILLY, TEMPLE’S NEW HEAD FOOTBALL COACH, with a giant photo of Diaz grinning and a Manny Diaz signature next to it — and OwlsTix.com below.

“As they say, ‘What a hoot!’’’ Diaz Sr. said of the billboard in a text message.