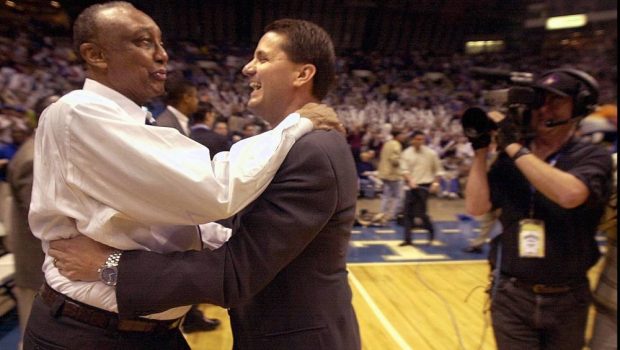 Temple legend John Chaney made a lot of friends in his 89 years on courts and earth:

“Coach Chaney’s ability to coach hard, yet build trust and teach life lessons, is unmatched in our profession, in my opinion. Although we were competitors, it’s what I admired most about him. Coach Chaney and I fought every game we competed — as everyone knows, sometimes literally — but in the end, he was my friend. Throughout my career, we would talk about basketball and life. I will miss those talks and I will my friend. Rest in peace, Coach!”

“Coach Chaney was like a father to me. He taught not just me, but all of his players more than just how to succeed in basketball. He taught us life lessons to make us better individuals off the court. I owe so much to him. He made me the man I am today.”

“He’s probably been the one person that I consistently talked to. That watched the games, that gave insight. He’s one that I truly love. He gave me all that I had and I didn’t have to ask for it. He knew. He knew what I needed when I started coaching. He just fostered that and allowed me to grow and allowed me to make mistakes and was there to pick me up when things weren’t working out as I thought they should. Everybody in their lives, whether they’re in coaching, outside of coaching, or whatever profession, needs a person like coach Chaney in their life.”

“We have lost a true Philadelphia jewel. Coach Chaney’s enormous impact on our game has been felt across the nation and the respect for him reflects that. He has been an inspiration to players and coaches for generations.”

“I’m just grateful for my time with him. All those years I coached against him, many of those obviously resulted in a not-successful outcome. He won many, many games. The people that he touched and the lives that he influenced; I think that’s what’s so great about the profession that we have. John Chaney impacted all of these players that he had and then he became their friend. They see him in a totally different light and appreciate him even more than when they played for him.”

“RIP Coach John Chaney! A true legend in coaching. I learned so much about coaching & life from you. I will always be grateful my time at Temple and our friendship.”