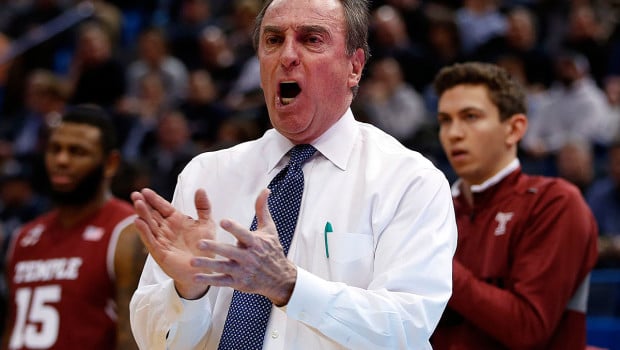 TEMPLE’S DUNPHY A WELL-DESERVED AAC COACH OF THE YEAR!

Temple coach Fran Dunphy, who is often overlooked as a great coach and tactician because of the national dominance of Villanova and its coach Jay Wright, has just gotten a big honor.

For the second straight season, Dunphy was named the American Athletic Conference Coach of the Year. The award, voted on by the league coaches, was presented at the American’s awards luncheon held at Orlando’s Amway Center today.

“I am honored and humbled to be selected by my peers as the Coach of the Year in the American Athletic Conference,” said Dunphy. “This is really a programmatic award in that our coaching staff has worked hard all year long and, as it is a players’ game, they deserve much of the credit as well. This truly is a team honor.”

Picked sixth in the conference’s preseason coaches’ poll, Dunphy guided his Temple Owls to its eighth 20-win season is his 10-year tenure and their third regular season conference championship during that span. The Cherry and White finished the regular season with a 20-10 overall record and 14-4 conference mark.

Temple defeated three ranked opponents in the regular season, #22/23 Cincinnati, #23/24 UConn and #8 SMU, for the first time since 1999-2000. The win over SMU was the seventh time in the last eight seasons that the Owls have knocked off a Top 10 opponent.

Top-seeded Temple opens play in the American Athletic Conference Tournament Friday (noon/ESPN2/1210 AM WPHT) in a quarterfinal game against the winner of Thursday’s first-round game between #8-seed East Carolina and #9-seed USF.