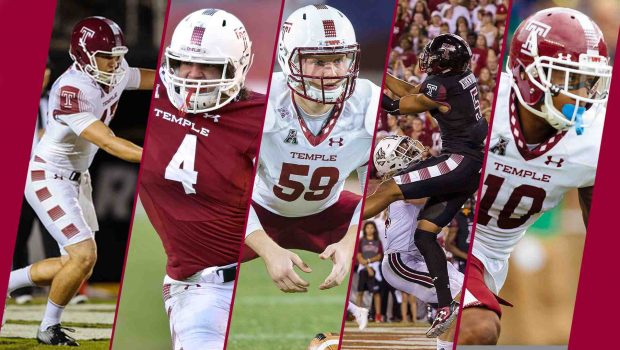 TEMPLE’S BOWL HOPES ON THE LINE AGAINST HOUSTON!

Can Temple put together another big offensive effort to keep pace with Houston, or will the Owls run out of steam in their third straight game against a top division contender in the AAC?

One of the top defensive linemen in the nation, Ed Oliver has missed the last two games for Houston. Oliver did warm up with his teammates last week as he looked to see if he could go at full strength while recovering from a bruised right knee. It was after warming up that Oliver and trainers determined it was not worth the risk to get him back on the field last week. Will one week provide a more optimistic chance for Oliver to get on the field against Temple? If so, then Temple will have its hands full trying to protect quarterback Anthony Russo.

There is no question that the insertion of Frank Russo into the starting lineup has given the Owls a more effective offense this season. In the last four games, Russo has thrown 12 touchdown passes, and he is coming off a four-touchdown performance with 444 yards at UCF last week. As much production as Temple is getting from his arm, Russo is also good for at least one interception per game as well. Russo has been intercepted in each of the last seven games, with five interceptions combined in the last two games against Cincinnati and UCF. Russo will have to protect the football better if Temple is to give Houston a good scare, although Temple has beaten Cincinnati and challenged UCF despite the errors.

The Owls started the season on a sour note by dropping the first two games of the season at home. With a seemingly challenging conference schedule ahead of them, six wins quickly looked to be nearly impossible, but Temple is now on the cusp of bowl eligibility after winning three of the last four games in the AAC, including handing Cincinnati its first loss of the year. The Owls can still probably count on a regular-season finale against UConn on the road if needed, but after pushing UCF last week, it would not be a surprise to see Temple flirt with clinching bowl eligibility this week.