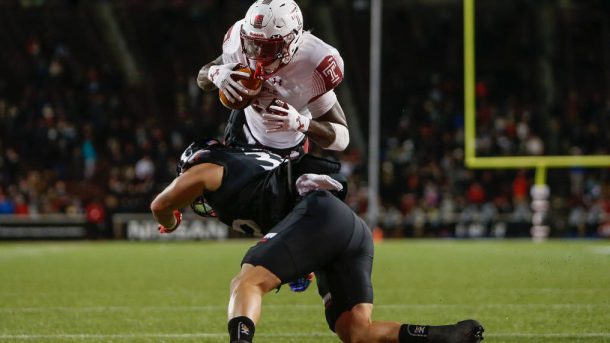 Frank Nutile threw for one touchdown, ran for another, Isaiah Wright had a 98-yard kickoff return and Temple beat Cincinnati 35-24.

With two games left, the Owls need one more victory to become bowl eligible. One more win and the senior class will be the best all-time.

“Our seniors are special. I’m lucky I got to be their coach,” first-year coach Geoff Collins said. “They’ve gone through a lot with this program. A lot of them had to wait their turn.”

Hayden Moore threw a 29-yard pass to Thomas Geddis and Mike Boone had 28- and 21-yard runs on consecutive plays to make it a one score game with 7:40 left in the third quarter but Wright took the kickoff back 98 yards to separate the Owls from the Bearcats. Wright then threw a two-point conversion pass to Nutile on a trick play.

“For the first time I told the guys I’m disappointed with the way we coached; disappointed with the way we prepared the,” Cincinnati’s first-year coach Luke Fickell said. “It is baffling to me. The defense can play really well in the first half and have really big stops in tough situations. The offense doesn’t move the ball in the first half. In the second half it completely flips. We have to find a way to break through some of this stuff.”

“He studies film and works hard,” Collins said. “You could see it on several key plays tonight. He is a great kid.”

Hood has spent most of the season backing up Ryquell Armstead.

“I look at myself as the No. 1 back every week,” Hood said. “Our offense really came together tonight.”

Cincinnati had a 76-yard punt return called back for an illegal block in the back and fumbled to set up one of Aaron Bourmerhi’s two first half field goals.