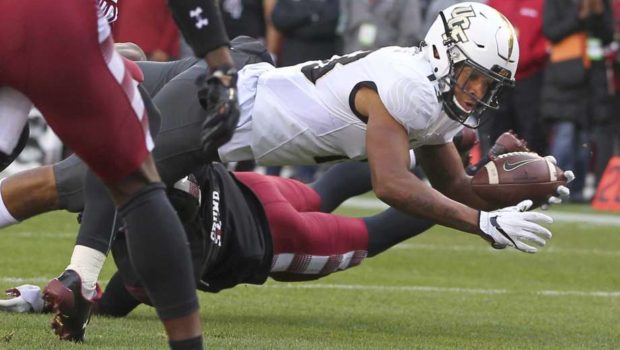 McKenzie Milton threw four touchdown passes and ran for a score as No. 12 Central Florida beat the Owls 45-19.

The Knights (10-0, 7-0 American Athletic conference, CFP No. 15) turned three Temple turnovers inside the Owls’ 25 into 17 first-half points, taking a 31-10 lead when Gabriel Davis stretched across the goal line for a 5-yard touchdown reception with 2:36 left in the second quarter.

The AAC East Division will be decided on Black Friday in Orlando, Florida, when No. 23 South Florida (9-1, 6-1) visits UCF. Temple (5-6, 3-4) could have been easy to overlook for the Knights. The game had no bearing on whether they play for a conference title and a loss probably wouldn’t have damaged their chances to play in a New Year’s Six bowl.

With speculation swirling about where second-year coach Scott Frost might be coaching next and a huge game looming, the Knights insisted earlier in the week they would not be distracted. Mission accomplished.

Shaquem Griffin, the 2016 AAC defensive player of the year whose left hand was amputated when he was 4, was all over the field for the UCF defense. He forced a fumble in the first half that set up a score and made his second career interception in the second half, running step-for-step down field with a receiver and cradling the ball into his chest.

Frank Nutile, who helped revive Temple’s offense when he took over at quarterback four games ago, was picked off four times.

The Owls tried to slow the pace against the Knights, but turnovers killed that plan. Temple is not built to get into a back-and-forth game with the highest scoring team in the country.