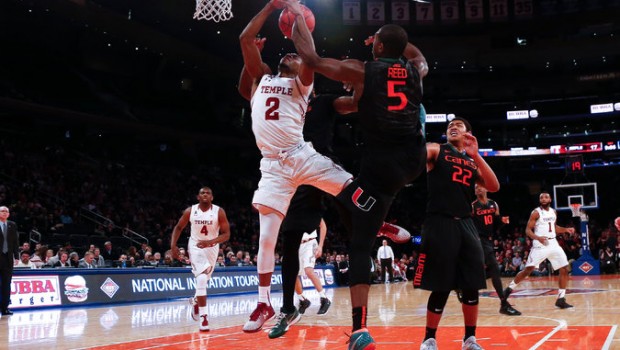 If it looked like Temple had amped up its offense during the NIT, which ended for the Owns last night with a 60-57 loss to Miami, you were paying attention:

The NIT had implemented a 30-second clock on an experimental basis.

Through much of the regular season, the Owls were characterized by strong defense, but had long stretches of inefficient offense with the standard 45-second shot clock. During the NIT the Owls became an offensive revelation, averaging 74.3 points per game — about 9 points more than the regular season — despite scoring only 57 points in their loss to Miami.

Temple coach Fran Dunphy, who built Penn into an Ivy League power during the 1990s — often with a slower, more meticulous offense — said college basketball was headed toward a faster pace of play.

“I’m glad the NIT implemented it,” Dunphy said. “I think we’re going to see a 30-second shot clock very soon, if not next year. I think everyone wants to see more scoring.”