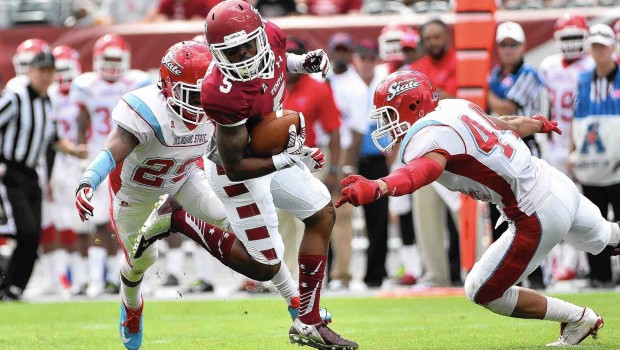 P. J. Walker threw two touchdown passes and the Owls scored twice on special teams as they thumped Delaware State 59-0 at the Linc..

Walker finished 10-of-14 for 127 yards and two interceptions while Kenneth Harper added two touchdowns for Temple (2-1), which forced four turnovers. Jalen Fitzpatrick (photo above) caught three passes for 75 yards and a touchdown while Sharif Finch chipped in with a defensive score for the Owls, who open American Athletic Conference play at Connecticut next week.

Zach Bambary had one catch for 14 yards for Temple. Bambary also had two solo tackles and an assisted tackle on special teams. Marian Catholic grad Brendan McGowan started on the offensive line for the Owls.

Gilbert Rivera was limited to 9-of-19 passing for 56 yards and three interceptions for Delaware State (0-4), which managed only 93 yards of total offense. Ronald Robinson and Willie Burton grabbed an interception apiece for the Hornets, who fell to 1-5 all-time against FBS opponents.

Temple jumped out to an early 14-0 lead as Artrel Foster returned a blocked punt 15 yards for a touchdown before Harper plunged into the end zone from 2 yards out. The Owls doubled their advantage after Khalif Herbin’s 84-yard punt return touchdown and Jamie Gilmore’s 4-yard scamper.

Temple put the game out of reach when Fitzpatrick hauled in a 31-yard touchdown pass and Finch returned an interception 65 yards for a score en route to a commanding 49-0 halftime lead. Hassan Dixon scored on a 1-yard touchdown run in the fourth quarter as the Owls went on to register their first shutout since 2011.