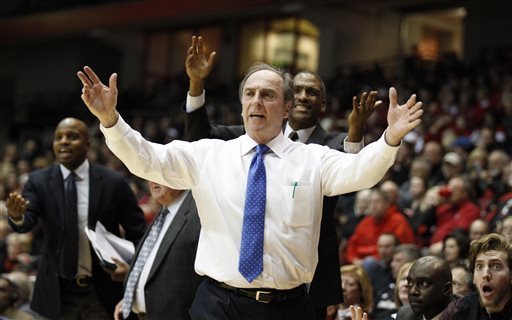 TEMPLE, WITHOUT CUMMINGS, SWAMPED BY CINCY 84-53

You want to know how important Wil Cummings is to Temple’s 12-7 Owls?

Coach Fran Dunphy (photo above) couldn’t play him last night and Temple missed his senior leadership at Cincinnati, which broke away from a tight game to swamp the Owls 84-53.

Jesse Morgan led Temple (12-7, 3-3) with 15 points with Obi Enechionyia adding 14. The Owls were without Cummings (12.9 points per game), who has been hampered by a strained muscle in his lower left leg.