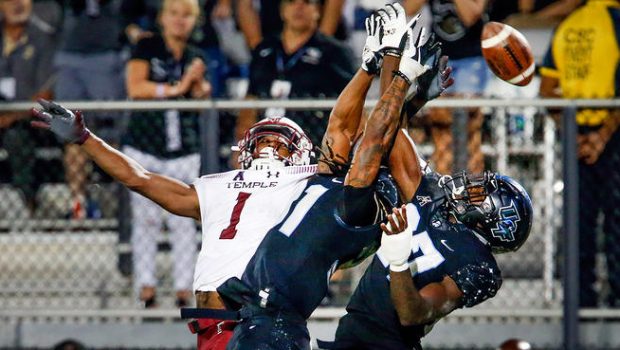 Temple hit the ceiling in the AAC last night at the Linc.

Otis Anderson rushed for 205 yards, Bentavious Thompson scored two of Central Florida’s five rushing touchdowns and the Knights ran away from Temple in the second half of a 63-21 victory.

Dillon Gabriel threw three touchdown passes for UCF. He completed 10 of 21 attempts for 218 yards. His big throw was the 73-yard catch-and-run that went to Marlon Williams.

Temple (5-3, 2-2) scored two touchdowns in the latter part of the second quarter. Anthony Russo’s second TD pass of the half was a 75-yarder to Branden Mack and Jager Gardner ran 1 yard for a score with 20 seconds remaining to make it 28-21 at halftime.

Russo completed 12 of 24 passes for 199 yards with two touchdowns and two interceptions. Temple had 40 rushes netting only 45 yards.

The Knights, seeking their third consecutive conference championship, have won 31 of their past 34 games. They trail first-place Cincinnati (6-1, 3-0) by half a game in the East Division. Cincinnati did not play this week.