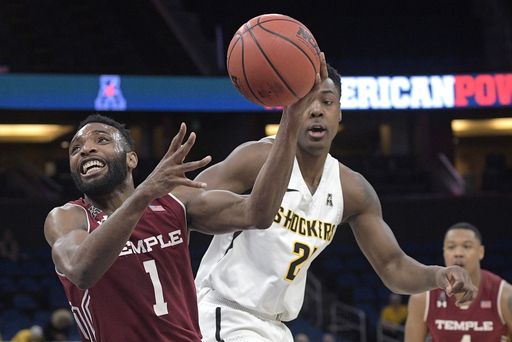 The Owls had some nice early season wins — Wisconsin, Clemson, Auburn, South Carolina — but need to take the next step in the conference season. The Owls were only 8-10 in AAC play.

Landry Shamet scored 24 points, Rashard Kelly had 16 and Wichita State held off Temple for an 89-81 victory in the AAC tourney.

Wichita State (25-6) also got a strong performance from its reserves, including 13 points from Austin Reaves. Next up is No. 21 Houston, which eliminated Central Florida with an 84-56 victory.

The Shockers won two of three against the Owls this season, and the outcome was in doubt every time.

“We certainly do bring out the best in them,” Wichita State coach Gregg Marshall said. “The bottom line is that they make a lot of shots against us, but we usually do get great contributions from our bench. We go 10 or 11 deep and that’s a good thing.”

Temple stayed close with its perimeter shooting. The Owls went 11 of 24 from 3-point range and shot 50.9 percent from the field overall.

Quinton Rose led Temple (17-15) with 25 points. Shizz Alston and Josh Brown each had 15 points for the Owls, who didn’t have enough depth to keep pace with Wichita State in the final minutes.

“I loved our fight, I loved how we were hanging with them each and every moment,” Temple coach Fran Dunphy said. “I think late we just needed another basket, another stop, but they’re a really good basketball team. They made some veteran plays at the right time.”

The Shockers were clinging to a 63-61 lead with eight minutes to play when Reaves, fellow reserve Markis McDuffie and Kelly powered a key 13-3 run. The three combined for 11 points in the surge and helped cool off Rose while leading Wichita State to a 76-64 advantage with just over four minutes remaining.

Shaquille Morris made two foul shots to put the Shockers up 55-45 early in the second half, but the Owls rallied behind Rose. The sophomore guard scored 12 of his team’s next 14 points to cut the deficit to 61-59 with 9:10 left.

“Quinton did a great job in that stretch and got us where we needed to be,” Dunphy said. “But again, we needed a little better effort at the defensive end and just be a little smarter.”