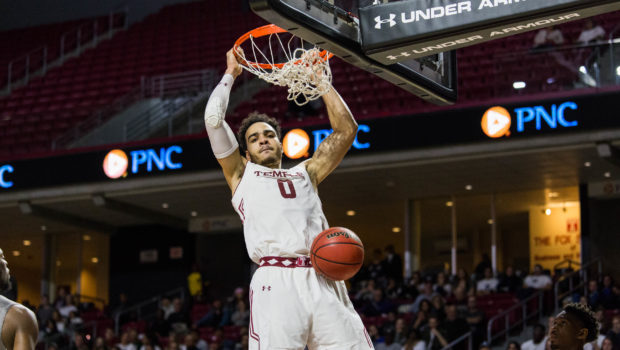 Josh Brown, who missed all but five games last season because of an Achilles tendon injury, scored 13 points and Shizz Alston added 14 points to lead Temple past Clemson, 67-60 in the finals of the Charleston Classic.

It was Brown’s clutch shooting to start the second half that propelled the Owls to victory.

The Owls, which led by seven points at halftime, took control of the game when Brown connected on back-to-back 3-pointers to start the second half.

Temple, which had not played a game until coming to the Lowcountry of South Carolina, began its season a week later than most college basketball teams across the country. The extra week’s preparation certainly seemed to help the Owls (3-0) on the floor.

“It’s been a terrific week for us, it’s a long week, but coming down here and winning the tournament is big for this team,” said Temple coach Fran Dunphy. “It’s a long time to be away from home, but to come out of here with three wins over three good teams is great. We’re thrilled to win and it’ll make whatever we eat on Thanksgiving a little bit sweeter.”

Temple went on a 16-5 run over the next seven minutes as Alani Moore came off the bench to spark the Owls.

Moore missed his first 3-pointer and then proceeded to knock down his next two shots from distance. Alston and Obi Enechionyia each added 3-pointers as the Owls made four of six during a five-minute span to stretch Temple’s lead to 30-22 with 4:17 to play in the first half.

The Owls were more than happy to take advantage of the Tigers carelessness with the ball in the opening minutes of the second half. The Owls got a layup from Enechionyia and another 3-pointer from Brown and Temple led 50-36 with 12:58 to play in regulation.

Just when it looked like the Owls would seize control of the game, the Tigers went on a 10-3 run to close the gap to 53-46 on Mark Donnell’s 3-pointer with 9:47 play. Donnell, a graduate transfer from Michigan, highlighted the Tigers run with six points.

Clemson made another push as Marcquise Reed and Grantham hit back-to-back layups to cut the lead to 57-50 with 3:03 to play.

But after a Clemson timeout, Alston dribbled the ball at the top of the key, until the final seconds of the shot clock, knocking down a 3-pointer that gave the Owls a 60-50 lead with 2:31 to play.

Clemson wasn’t finished. Layups from Grantham, Marcquise Reed and Shelton Mitchell pulled the Tigers to within, 60-56, with 50.6 seconds to play.

The Owls put the game away, hitting seven of nine free throws over the final 25 seconds to secure the victory.