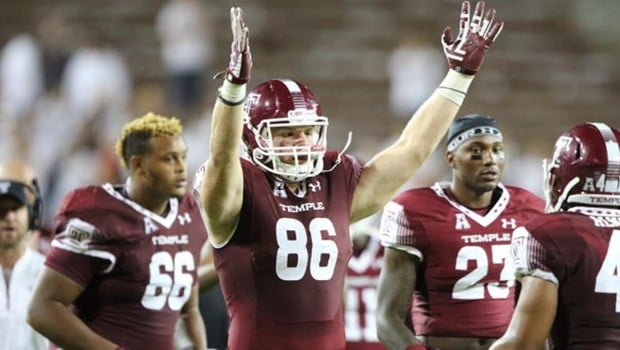 All hail Temple, the power of the East!

The Owls are 5-0 for the first time in 41 years after its defense swarmed and smothered Tulane in a 49-10 victory on Saturday at Lincoln Financial Field.

The Owls (5-0, 2-0) are off to their fastest start since 1974 and scored the most points in a homecoming game in school history. The Green Wave (2-3, 1-1) led 10-7 at one point in the first half, but lost any momentum amid turnovers, penalties and a sputtering offense.

Tulane quarterback Tanner Lee, under constant pressure and with no help from his running game, threw two crucial interceptions in the third quarter that turned the game into a blowout.

The Green Wave finished with only 110 total yards.

Tulane freshman punter Zachary Block, making his debut after taking over for Peter Picerelli, had an interesting Saturday.

His second punt bounced off an unaware Temple player and the loose football was wisely grabbed by Devon Breaux.

The ensuing drive on a short field was highlighted by a 16-yard Rob Kelley run in which he leaped over a Temple defender. Tanner Lee hit Teddy Veal for a 7-yard touchdown to give the Wave a 10-7 lead early in the second quarter.

It was largely downhill from there.

Zachary Block dropped a seemingly well-placed snap on his next punting opportunity later in the second quarter. He was promptly crushed by a phalanx of Temple linemen.

The Owls took over Tulane’s 12 and were in the end two plays later on a 16-yard reception by running back Jahad Thomas.

The Owls’ success on the ground was in stark contrast to Tulane. The Wave had only 66 yards of total offense (87 passing, -21 on the ground) in the first half.

Temple actually fumbled five times in the first half, although only two were recovered by Tulane, and the sloppiness masked what was otherwise a fairly dominant first half.

The first of those lost Temple fumbles gave Tulane the first points of the game. Freshman and New Orleans native Roderic Teamer dislodged the ball from Temple back Ryquell Armstead and Darian Monroe pounced on the ball. The drive fizzled after a promising start, but the Wave settled for a 27-yard field goal by Andrew DiRocco.