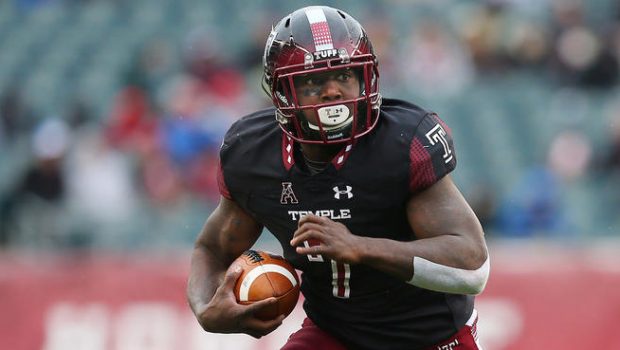 TEMPLE STAYS IN THE BOWL HUNT WITH COMEBACK 27-17 WIN!

Isaiah Wright returned a punt 73 yards for a go-ahead touchdown and Chapelle Russell recovered a fumble in the end zone as Temple rallied for a 27-17 victory over South Florida.

Temple got on the scoreboard with its first possession of the third quarter when Ryquell Armstead (above) capped a 10-play, 69-yard drive with a 1-yard TD run.

The Owls recovered a fumble on the Bulls’ ensuing possession and marched 43 yards before Will Mobley’s 33-yard field goal pulled them within 17-10.

Temple forced a punt and the Owls drove 61 yards in nine plays and Mobley’s 36-yard field goal cut the deficit to 17-13.

Temple forced a three-and-out and Wright returned the punt to put the Owls up 20-17.

Russell capped the scoring for Temple when he recovered a fumble in the end zone after a strip-sack of Dana Levine by Blake Barnett.

Anthony Russo passed for 264 yards for the Owls, connecting with 11 different receivers.