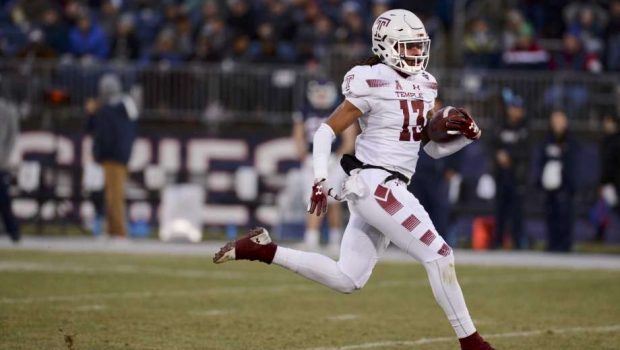 TEMPLE SMACKS UCONN 57-7 AND WAITS FOR THE BOWL CALL!

By Mary Cunningham and the Associated Press

Temple is just sitting and waiting to find out where they will play in a postseason bowl game.

The Owls finished the regular season with a blowout win while sending UConn into the NCAA record book for all the wrong reasons.

Owls receiver Isaiah Wright (above) ran for a touchdown and returned a kickoff for another as Temple routed the Huskies 57-7.

The Owls (8-4, 7-1 American), who started the year 0-2, finished the regular season with three straight wins and victories in six of their final seven games.

It took Temple just two minutes to go 71 yards for the first score of the game, an 18-yard run from Wright — a Connecticut native — who took a pitch on an option play. After UConn tied the game at 7 a few minutes later, Wright grabbed the kickoff at the 1-yard-line, and went 99 yards straight up the middle of the field for a touchdown.

”Previously playing UConn, I never really did what I felt like I should do,” the junior said. ”So, coming into this game, I just wanted to make sure I didn’t feel the same way I felt prior.”

The Owls scored on seven of their eight first-half possessions and led 40-7 after two quarters. They never took their foot off the gas pedal and finished with 516 total yards.

”They just keep playing,” said Temple coach Geoff Collins. ”If we’re down at halftime or if we’re up by 33 at halftime, we just want to play our brand of football. ”It’s a pretty good brand.”

UConn, on the other hand, has some work to do on its football reputation.

At one point during the second quarter, UConn threw an interception and fumbled three times on consecutive offensive plays. The Huskies recovered the last two fumbles, but threw another interception on the next play, which was run back by Temple’s Christian Braswell for a touchdown.