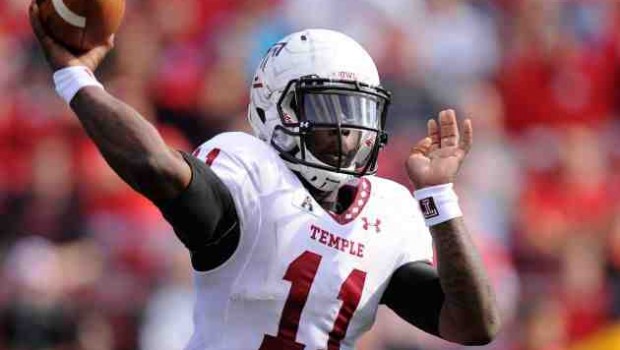 Are the Temple Owls the favorites in the American Athletic Conference?

A week after beating Penn State for the first time since 1941, Temple went to Cincinnati and knocked off the presumptive AAC East favorite Bearcats 34-26.

Temple led at halftime 10-6 and Jahad Thomas took the opening kickoff of the third quarter for a touchdown and a 17-6 lead. The return set off a big play frenzy as Cincinnati responded on the second play of its next drive when Gunner Kiel hit Mekale McKay for an 88-yard touchdown.

Thomas immediately answered. On the second play of Temple’s next drive he ran for a 56-yard touchdown and a 24-12 lead. Two drives later, P.J. Walker found Robby Anderson for a 19-yard touchdown pass and the Owls had a 31-12 lead.

Cincinnati fought back and had a chance to get the game into overtime after Thomas, who finished with 193 rushing yards and 342 all-purpose yards, fumbled the ball with less than three minutes remaining and the Owls leading 34-26. Cincinnati got the ball all the way to the Temple 5-yard-line but Kiel threw his fourth interception of the second half as Tyler Matakevich made a great catch in the end zone to preserve the win.

It’s crazy to say a team has taken control of a division two weeks into a season so we won’t go that far with Temple. But it’s certainly not crazy to say the Owls are now the team to beat in the AAC East and possibly Boise State and BYU’s biggest challenger to represent the Non-Power Five conferences in a New Year’s Day bowl game.

The Owls’ toughest remaining conference games are against Central Florida, a team that lost at home to Florida International in Week 1 and Memphis in November. And Temple’s biggest game of the season might have even gotten a little easier with the news that Notre Dame quarterback Malik Zaire is out for the season. The Owls face the Irish on Halloween.

Yes, that’s a lot of projecting. But Temple, a team expelled from the Big East in 2004 – the conference’s remains became the base of the AAC – looks like its on the fast track to the fifth bowl game in program history and it’s best one since the 1934 Sugar Bowl.