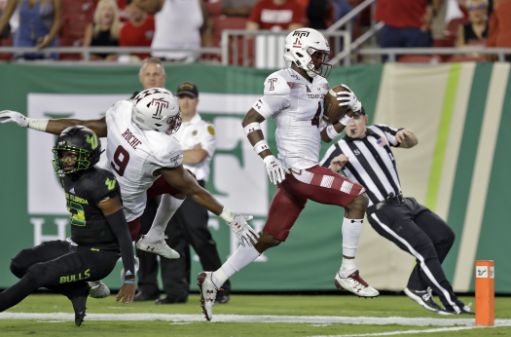 Sam Franklin (above) scooped up a fumble and returned it 39 yards for Temple’s second touchdown and Temple beat South Florida 17-7.

Christian Braswell punched the ball out of the grasp of receiver Terrence Horne and Franklin grabbed it and raced down the left sideline for a 14-0 lead in the third quarter.

Jager Gardner rushed for a career-high 133 yards on 25 carries, including a 57-yarder, while Jadan Blue caught 11 passes for 121 yards for the Owls. Quincy Roche led the defense with 3 1/2 of the Owls’ nine sacks.

Kenny Yeboah took a 1-yard pass from Todd Centeio with 1 1/2 minutes left in the first half to complete a nine-play, 80-yard drive for the Owls (6-3, 3-2), who snapped a tie for third place with USF (4-5, 2-3) in the American Athletic Conference’s East Division.

Jordan McCloud threw a 14-yard TD pass to Bryce Miller late in the third quarter for the Bulls’ lone score before Owls kicker Will Mobley booted a career-tying 44-yard field goal early in the fourth quarter.