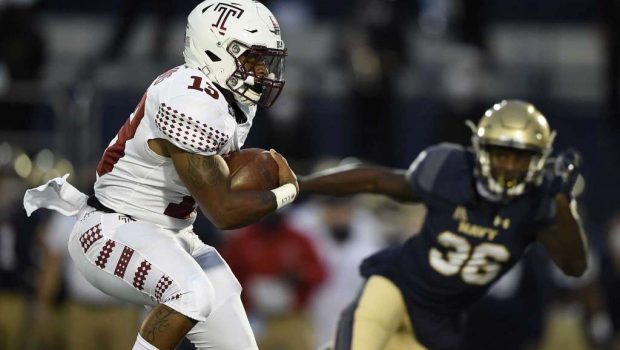 With the 4,400-strong Brigade of Midshipmen in attendance, Navy scored first and led thereafter in giving Ken Niumatalolo his 100th career win, all at the academy

The Midshipmen rolled up 251 yards rushing, led by Smith, who had 120 yards on 20 carries, including TDs of 26 and 22 yards, the second score giving Navy a 28-17 lead with just over a minute left in the third quarter.

Temple’s Anthony Russo scored from 9 yards out early in the fourth quarter but his 2-point pass was nullified by a penalty. The Midshipmen (2-2, 2-0 American) then used up nine minutes on a drive that ended with Nichols’ field goal, the longest for Navy in nearly a decade.

Temple drove the field with Re’Mahn Davis’ 1-yard run getting the Owls within two, but Russo’s conversion pass was broken up by Adams, who led Navy with nine tackles.

Navy, which has had a different starting quarterback in its first three games, put Dalen Morris back in charge of the option offense. He completed his only two passes, one a 36-yard screen to CJ Williams that set up Chance Warren’s short TD run in the second quarter.

Russo was 21-of-30 passing for 206 yards, with a touchdown and an interception in the Owls’ season opener.

This was the third time in four games Navy faced a team playing its season opener.

The Owls wore an “Owls for Justice” patch on their uniforms. The patch will be worn by all of Temple’s varsity teams.