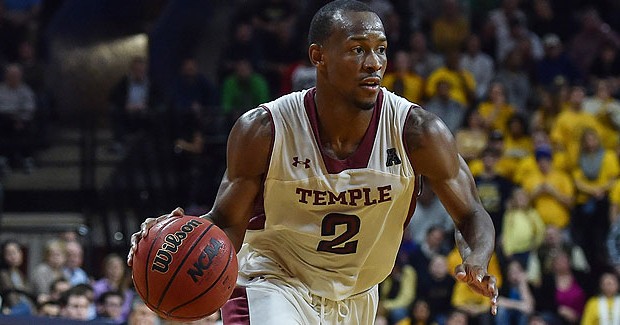 Temple coach Fran Dunphy: “Will Cummings (photo above) … sort of strapped us on his back against Bucknell and would refuse to let us lose.”

Selection Sunday dawned and ended on North Broad Street with a thud.

Temple was ignored by the NCAA tournament selection committee even though the Owls had racked up 23 wins, including a 25-point pasting of nationally ranked Kansas back in December.

So, 16 days later, where are Fran Dunphy’s plucky group:

In Manhattan ready to play Miami tonight in Madison Square Garden in the NIT semifinals.

It’s not the Big Dance, but Temple is glad to be here.

“We were certainly devastated that Sunday evening (of the NCAA tournament selection show),” Dunphy says. “But I give great credit to our guys, they stepped up and really took advantage of the NIT and what it has to offer. We’ve had three good wins and we know what we’re facing tomorrow night against a very talented Miami team.”

Now over the years there have been several teams that were shunned by the NCAA tournament committee that then fell flat on their face in the NIT. Dunphy talks about his team being able to get past the disappointment of the NCAA snub.

“I think you can talk about it all you want, but until you play the next game, then that’s when you know whether or not your guys are ready,” Dunphy says. “I would give Will Cummings much of that credit, he sort of strapped us on his back against Bucknell and would refuse to let us lose. I think since then we’ve taken on a pretty good way about ourselves right now.”

Cummings, a senior guard, has been outstanding in this tournament, averaging 22 points in the Owls three wins over Bucknell, George Washington and Louisiana Tech. Overall this season Cummings is averaging a team high 14.9 ppg for the 26-10 Owls.

This will be the first meeting between Temple and Miami since 2005 (73-56 Temple win). The Hurricanes are 24-12 this season and they beat North Carolina Central, Alabama and Richmond to reach New York. Miami has played tight games throughout this NIT as their three wins are by a total of 13 points.

“Always the concern is how they defend you and they have a good plan defensively,” Dunphy says. “They have multiple ways of attacking you on the offensive end. They are good inside, they are talented outside.”

Miami has a great point guard named Angel Rodriguez, but it is looking like the redshirt junior is unlikely to play because of injury. Redshirt junior Sheldon McClellan paces Miami in scoring at 14.4 ppg.

If Temple wins tonight, it will play the Stanford Old-Dominion winner Thursday night for the NIT title.

It’s not the Big Dance but MSG is the world’s biggest stage and the Owls will take advantage of it.