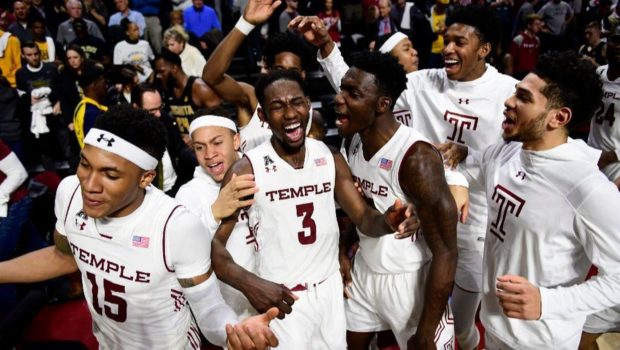 “There’s a lot of travel in this league. It’s a hard league,” Temple coach Fran Dunphy said. “There’s some really good teams, terrific coaching that goes on, outstanding talent. You have to try to hold your end of the bargain at home.”

How much did it mean to Temple to knock off a ranked opponent for the 11th straight year? Fans stormed the court after Markis McDuffie’s 3-point shot clanged off the rim and the ball caromed into the backcourt as time expired.

Shizz Alston Jr. shook off a poor shooting performance to score 12 points, including the tying bucket at the end of regulation.

“They’re a great team, well-coached and have a lot of guys that can shoot and make plays,” Alston said. “I think we were just tougher tonight.”

Dunphy joked that he wanted to run on the floor and stop Rose from shooting a 3 after Nate Pierre-Louis rebounded Alston’s miss with 21 seconds remaining and the score tied.

But after Rose missed, Enechionyia was fouled by Shamet in the scramble for the rebound. He calmly made both shots and soon the Owls were swarmed by celebrating students.

The Owls earned another big win alongside upsets of Clemson and Auburn.

“To get a win like his against a team that has that kind of cache to it, it’s good,” Dunphy said.

Shaquille Morris had 24 points and nine rebounds and Austin Reaves added 20 points for the Shockers (17-5, 7-3).

Alston, who was just 5 of 22 from the field, made a driving layup in traffic with 6.8 seconds left in regulation. Zach Brown then missed a corner 3 for Wichita State as time expired.

The Shockers led by as many as 12 points in first half, but nine second-half turnovers and Temple’s inspired play produced a comeback.

Temple entered just a game above .500, yet ranked No. 44 in the RPI thanks to a brutal schedule and wins over Auburn and Clemson.

The Owls frustrated the Shockers despite Morris’ big night. The rugged big man eclipsed 1,000 career points in the second half and his dunk with 2:19 left in overtime made it 79-74.

Wichita State, which tumbled in the rankings after consecutive losses to conference foes SMU and Houston, didn’t score again.