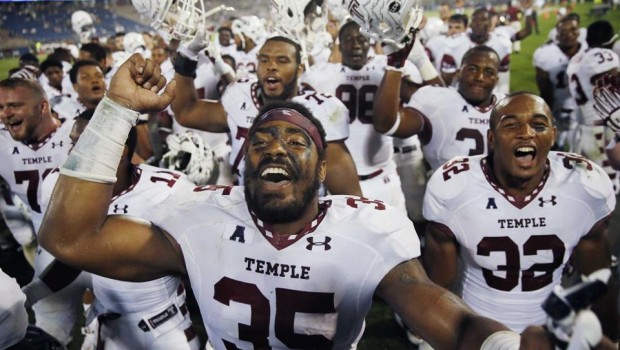 Don’t look now, but coach Matt Ruhle is turning things around for the Temple football program.

P.J. Walker threw for 231 yards and a touchdown, ran for another and Temple’s opportunistic defense scored two touchdowns and added a safety as the Owls won their American Athletic Conference opener with a 36-10 win over Connecticut on Saturday.

The Owls (3-1, 1-0) benefited from a 93-yard interception return for a score on the opening drive of the game as Tavon Young picked off the Huskies’ Chandler Whitmer.

The Owls added an 11-yard fumble return for a score by Praise Martin-Oguike in the third quarter off a sack of Whitmer to take control. Temple’s Tyler Matakevich also tackled Whitmer in the end zone for a safety in the third quarter as a 7-3 halftime lead became a 30-10 advantage at the end of the quarter.

Temple came into the game leading the nation in turnover margin (2.67 per game) and has scored a defensive touchdown in every game. The defense accounted for 16 points on Saturday. Temple has 17 takeaways this season after forcing three on Saturday.

“Give our defense credit,” Temple coach Matt Rhule said. “In all three wins this year, our defense has outscored the opponents’ offense.”

The UConn offense has committed critical turnovers early in every game this season and Saturday was no different. UConn has now given up four defensive touchdowns this year and has had a turnover on the opening drive in four of five games. All of those turnovers have led to touchdowns.

The game fell apart in the third quarter for the Huskies.

Temple scored 21 points in the first 4:54 of the third quarter. Walker added a 1-yard touchdown run and then Temple’s Sean Chandler sacked Whitmer with Martin-Oguike scooping up a fumble and returning it for a 28-3 lead.