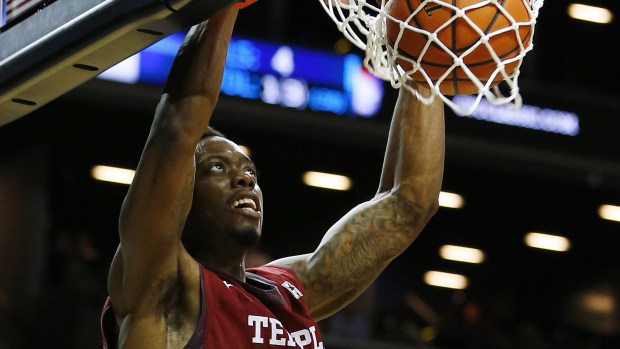 You might say Temple was glad to be out of the southwest.

After losing at SMU and Tulsa within the last week, the Owls made it back to North Broad Street Thursday night and felt right at home.

Temple’s Jaylen Bond took a Will Cummings pass, rose above the Cougar defender and slammed the ball with authority while he was fouled. Bond pumped his fist, the Owls’ bench rose to its feet and the home crowd went crazy. Temple coach Fran Dunphy said it “juiced” up the team.

“That was a great play,” Bond said. “That brought a lot of energy to myself and to my team. I felt like that was like the momentum going into the end of the game. So it was a big play for us.”

For the first time in five games, Cummings didn’t lead the Owls in scoring. (That honor went to Quenton DeCosey with 16 on Thursday night.) But the senior point guard filled up the stat sheet. Cummings scored 14 points to go along with five rebounds, seven assists and three steals in 38 minutes. He even drew a big charge in the second half.

The senior is playing his best basketball as the Owls are two games away from the postseason.

“He’s a really good basketball player,” Dunphy said. “He’s good at both ends, too. He’s running the show. He’s leading us on the offensive end. He does a really good job on the defensive end, keeping people in front of him. … Although I will have to ask him about the kid [Cavon] Baker went by him the one time. We’ll talk about that. But that’s so few and far between. His effort is always there and he’s playing at a really high level right now.”

After trailing by five points at halftime, Dunphy made a few adjustments and went to a smaller lineup in the second half, sending out four guards at a time. It worked. The smaller lineup helped to minimize the damage done by Houston forward Danrad Knowles, who had 11 points in the first half but finished with 13.

Aside from the momentum-shifting bucket with 16 minutes remaining, Cummings also found Bond for an alley-oop a little later. Bond said he and Cummings have developed a special connection, which makes those transition buckets come a little easier.

For the game, the Owls’ transition game was important. They had 13 fast-break points, while Houston didn’t have any.

“It’s very important but that also means you’re doing a very good job on the defensive end and you’re getting the ball out and running,” Dunphy said. “And Will’s really good at that, too.”

DeCosey had 16 points, Bond had 15, Cummings had 14 and Jesse Morgan had 10. After shooting just 35.5 percent in the first half, Temple went 16 for 29 from the field in the second half to help pull away. They also held Houston to 32.0 percent shooting in the second half.

LeRon Barnes led the Cougars in scoring with 15 points, while Devonta Pollard scored 14 and Knowles added 13. Houston was without its starting point guard L.J. Rose, who re-injured his foot last Saturday and was lost for the season.

The win for Temple was a big one. Not only did it help them avoid a losing streak, it also comes with just two games remaining in the regular season. The Owls face East Carolina next Thursday and UConn on short rest a few days later.

“I don’t think there’s any question, this was very, very important,” Dunphy said. “You need to win games. We’re in the home stretch. This is crunch time now. We need to win.”