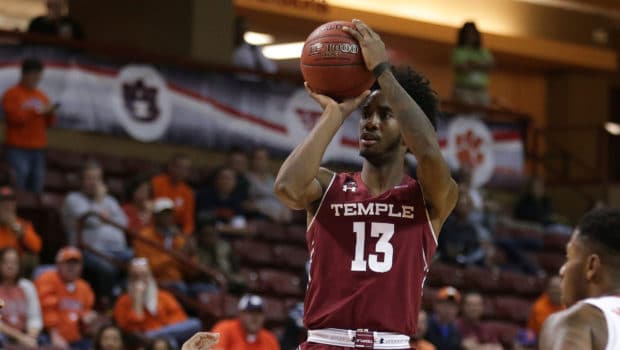 Yuta Watanabe and Jair Bolden scored 17 points each and George Washington held off rallying Temple in a 70-67 upset.

The Colonials (4-4) shot 68 percent in the first half, making six of their first seven 3-point shots, to grab an unlikely 40-25 lead on the Owls by halftime.

Temple (4-2), which had been off to its best start since the 2012-13 season, scratched away at the deficit after the break, including a late 10-0 run to pull within 57-56 and tied the game twice before George Washington edged away.

Bolden scored five of the Colonials last six points and Temple, despite two potential game-tying 3-pointers in the final 13 seconds, scored only three points in the last 4:10.

The Colonials’ starting five combined for 22-for-40 shooting with eight of the team’s nine treys.

Quinton Rose scored 20 points to be Temple’s top scorer for the third-straight game, and Shizz Alston, Jr. added 18, going 4 for 5 on 3-pointers.