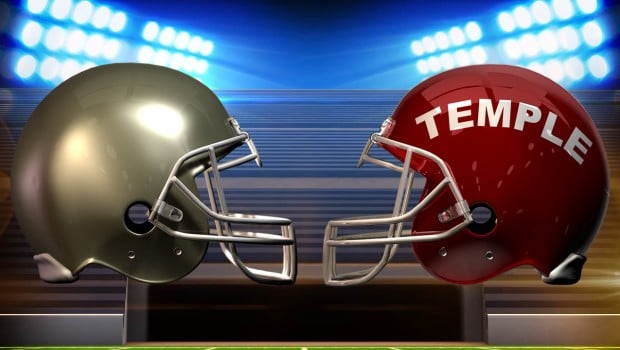 TEMPLE-NOTRE DAME IS A BETTING HEAD-SCRATCHER!

If you’re in a quandary about Saturday night’s Temple-Notre Dame showdown at the Linc, you’ve got good company.

Even ESPN touts Chris Fallica and Steve Coughlin are having trouble coming to closure on this one, with the Owls a 10-point underdog:

Fallica: It’s not quite Boston College-esque, but Temple’s offensive/defensive efficiency splits are dramatic. The Owls are 10th in defense, but 89th in offense. And four of Temple’s wins have come over teams that have two wins or fewer, including a 25-23 nailbiter vs. UMass in mid-September (a week later the Irish beat UMass 62-27 in what could have been a look-ahead spot for the Irish). Ten years ago this week Temple was 0-9 — and steamrolling to an 0-11 mark (outscored 498-107 on year) — so the program has made colossal steps forward. But I don’t see how the Owls will match up in the trenches or score many points at all. The defense will keep the Owls in it for a while, but ultimately the Irish will pull away to a comfortable win.

Coughlin: I’m worried that the Temple fan base is — and was — more concerned with whether or not College GameDay was coming to Philadelphia for the game, rather than the opponent that was invading the City of Brotherly Love this Saturday. I have been a huge fan of both these teams all year and they have two of the best defenses in all of college football. The question is: how will Temple go about this game offensively? Will the Owls come out and take shots down the field and try and get the Irish on their heels? Or will they play conservative and rely on their defense to win the game? My other question is with all the noise from Owls fans, will Temple even have a home-field advantage, knowing how there are Notre Dame fans all over the country? Golden Domers cover here.