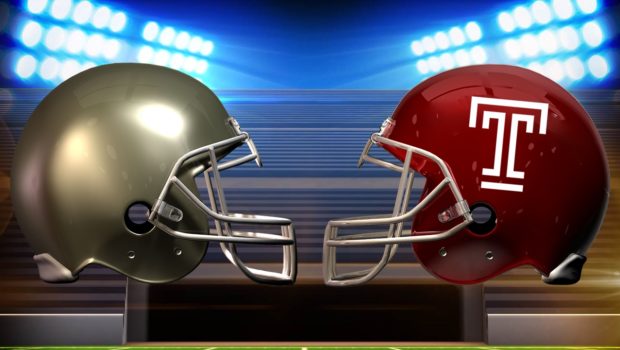 TEMPLE AT NOTRE DAME: CAN IRISH COACH BRIAN KELLY SAVE HIS JOB?

Notre Dame coach Brian Kelly endured an unacceptable 4-8 record in 2016 that was marred by poor tackling, porous pass coverage, the firing of defensive coordinator Brian VanGorder four games into the season and five blown leads in the fourth quarter that all led to losses.

Kelly is on the hot seat starting with Saturday’s season opener at home against 18-point underdog Temple.

And the eighth-year Irish coach hopes that hiring Mike Elko away from Wake Forest as his new defensive coordinator will be the catalyst to that change in style, scheme and success.

At the time of Elko’s arrival last December, Kelly admitted that the experiment of hiring VanGorder – a veteran defensive coordinator with a heavy NFL background – became a flawed idea and he said, “we needed to go back to collegiate. I knew that we needed to get back to fundamentals.”

And understanding that coaches get only 20 practice hours with their players each week, fundamentals are the foundation for Elko, not the intricate schemes used in the NFL.

“Didn’t think we played the game fundamentally well, that was the one thing that jumped out to us on tape,” Elko said when asked about his first impressions of his new team. “The game is played on the field. Too many times we try to play it in the meeting room.”

VanGorder used an elaborate approach to defense that his Irish players routinely said caused paralysis by analysis on the field.

“I would say consistently being successful in that scheme is more difficult that learning Chinese,” former safety Max Redfield said.

So armed with only a college coaching background, Elko provided exactly what Kelly was looking for.

Of course, major change doesn’t happen overnight, “anytime you go somewhere and try to implement your philosophy, initially, it’s not something the kids are ready for,” Elko said.

But through the spring and summer and into August, Elko’s repetitious approach to fundamentals began to take hold.

“Our strength has to be all 11 guys playing this defense together,” Elko continued. “How to play fundamental football, that’s our strength and that’s what makes me happy today.”

Defenses at his two previous stops — Wake Forest and Bowling Green – used the approach to become among the best in the country at forcing turnovers and several other important categories.

Elko’s Demon Deacons were 10th in takeaways last season. Notre Dame was 104th, leaving this as another area of daily emphasis for improvement.

“I’ve even had to adjust our practice schedules to make certain that we get that time in the schedule,” Kelly said of Elko’s routine, “so he can drill that to the point where he feels comfortable that we’re getting to that fundamental kind of football.”

In fact, the Irish haven’t been ranked higher than No. 70 in rushing defense since 2012 when they finished No. 11 against the run and played Alabama for the national title.

The players are buying into Elko’s style and system. It’s hard not to after the struggles of last season.