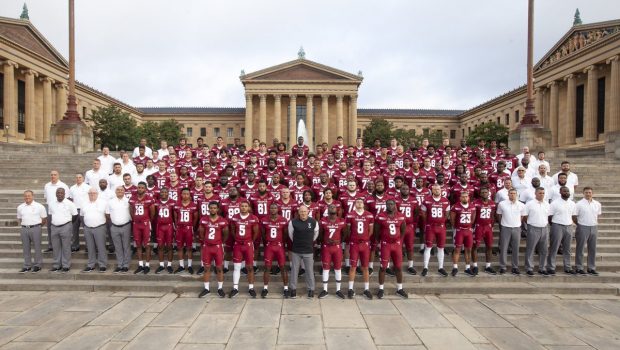 TEMPLE LOOKS LIKE IT’S TAKEN STEPS TO IMPROVE ON 7-6!

Temple kicks off its 2018 season at noon on Sept. 1 at the Linc against Villanova.

The Owls’ offense overall was pretty solid most of last season, averaging 25 points, 136 rushing yards and 252 passing yards per game.

On the ground, the Owls were led by David Hood, who rushed for 638 yards and five touchdowns. Ryquell Armstead was second on the team in rushing yards with 604 yards.

On the defensive side of the ball, the Owls were decent. They allowed 26 points, 175 rushing yards, and 207 passing yards per game. Temple was led in tackles by linebacker Shaun Bradley with 85 and defensive back Delvon Randall was second on the team with 83. Defensive linemen Sharif Finch led the team with 15.5 tackles for loss and in sacks with 8.5. Randall was the team leader in interceptions with four.

In 2018 the Owls look to take a step forward from their solid 7-6 season under first-year head coach Geoff Collins.

They were picked to finish third in the AAC East Division and fifth overall.

Temple is returning 14 starters, seven on offense, six on defense and one on special teams. Nutile will be the Owls starting quarterback after Marchi transferred to East Tennessee State this offseason.

Temple returns Armstead at running back and Wright at wide receiver. On defense, the Owls return Bradley and Randall, but have to replace a big loss in Finch. Temple will also have sophomore defensive end Quincy Roche, who as a freshman contributed right away.

Roche played in 13 games, recorded 31 total tackles, 11.5 tackles for loss and had seven sacks. The sophomore will look to be a big contributor this season and is sure to create havoc for opposing offenses.

The coaching staff for the Owls didn’t lose anyone over the offseason. Offensive coordinator Dave Patenaude will look for his quarterbacks to get off to a better start this season. Last year, the quarterback play was up and down, but did show promise in games last seasons against ECU, Navy, Tulsa and FIU.