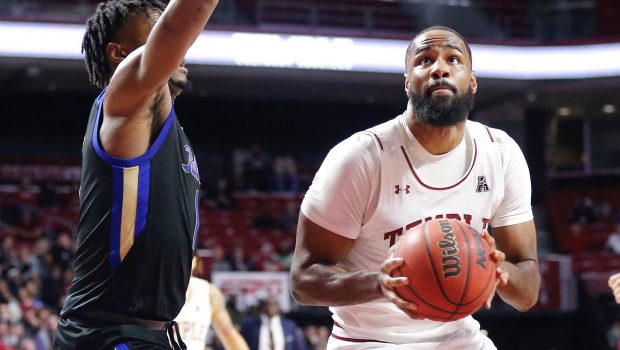 Quinton Rose scored 15 points and grabbed seven rebounds for Temple, and when he left the game with 15.7 seconds left, it was to hugs from Tulsa as well as Temple players. Rose is the first American Athletic Conference player to break 1,800 career points (1,841).

The conference-leading Golden Hurricane (21-9, 13-4), won their fourth straight game and have a half-game on No. 21 Houston. Jeriah Horne added seven rebounds and five points.

The Owls (14-16, 6-11) have lost four straight games. Nate Pierre-Louis was held to four points on 1-for-6 shooting but had 12 rebounds and three assists. Damion Moore (above) added nine points, 10 rebounds and four blocks.

Temple finishes out the regular season against Cincinnati on the road on Saturday.