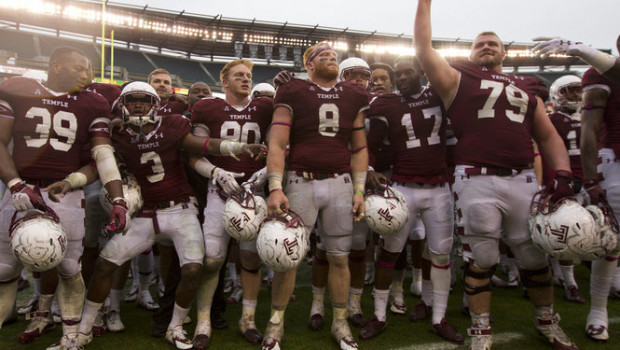 Temple takes its 2-0 record up to Foxboro Stadium this Saturday for its first game ever against UMass.

The Owls enter the game just outside the AP Top 25, 10 points away from No. 25 Oklahoma State. The teams will play at Lincoln Financial Field in 2017. The Minutemen enter 2015 after a 3-9 season, although that record might be misleading. UMass lost five games last season by a touchdown or less, including Power Five teams Colorado and Vanderbilt.

Blake Frohnaphel returns at quarterback, following a productive 2014 season where he threw for over 3,300 yards and 23 touchdowns in 10 games. He’ll face the Owls’ defense which leads the American Athletic Conference with 11 sacks. Their ground game is led by junior Shadrack Abrokwah, who eclipsed 100 yards three times in 2014. Temple’s front seven, led by Tyler Matakevich and Matt Ioannidis, will look to continue their stout defense. Frohnaphel will look to hit senior wide receiver Tajae Sharpe, who accumulated 85 catches for 1,281 yards in 2014. Senior Tavon Young and the secondary will look to build on their strong start to 2015.

Temple’s offense has begun 2015 with a strong start. Junior running back Jahad Thomas followed up his 135-yard game against Penn State with 193 yards at Cincinnati. He’ll lead the Owls ground attack against a Minutemen defense who allowed over 2,300 rushing yards last season. P.J. Walker set a career high with a 75.0% completion rate in the win over Penn State, spreading 15 passes to seven different receivers. Temple’s tall wideouts like redshirt senior RobbyAnderson and redshirt sophomore Adonis Jennings will test the UMass secondary, led by Randall Jette.