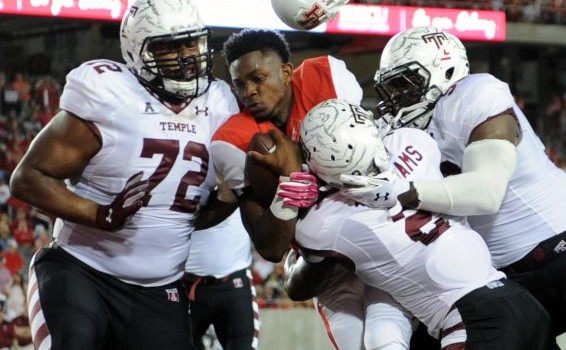 TEMPLE GETS THUMPED BY HOUSTON AS WALKER STRUGGLES 31-10

Temple took its 4-1 record into the jaws of college football’s hotbed and got burned 31-10 by Houston Friday night.

The Owls’ offense had averaged more than 35 points per game never got going as quarterback P. J. Walker struggled early, missing on his first four passes and throwing an interception which was returned for the first touchdown of the game.

The defense weathered the quickness of Houston sophomore quarterback Greg Ward Jr., a dual-threat quarterback with 4.5 40-yard dash speed. The shifty signal-caller found his stride, however, completing 88 percent of his passes and throwing two touchdowns, a far cry from Walker’s 41 percent completion rate and one touchdown pass.

Sophomore running back Jahad Thomas continued to produce, with 49 yards on seven carries and a team-high 150 receiving yards, two of which coming off of screen passes, both resulting in 72-yard gains.

Walker struggled to recover in the second half, accounting for all of the Owls’ turnovers with three interceptions and one fumble occurring inches away from the goal line in the third quarter.

Walker’s seven interceptions through the first six games of the season are one less than his total during his playing time last year, where he participated in nine games and had nearly 100 more attempts than he currently has on the 2014 season.

The Owls’ lone touchdown came on a 39-yard pass to newcomer Keith Kirkwood in the second quarter, a lengthy receiver who was held out of the first four games after transferring from Hawaii.

While the game sat one score away from the Owls at the start of the second half, the Cougars’ third quarter burst pushed the game out of reach for Temple’s offense.

The defense lost redshirt sophomore starting linebacker Avery Williams early in the first quarter to a knee injury on a field-goal attempt, he did not return to play.