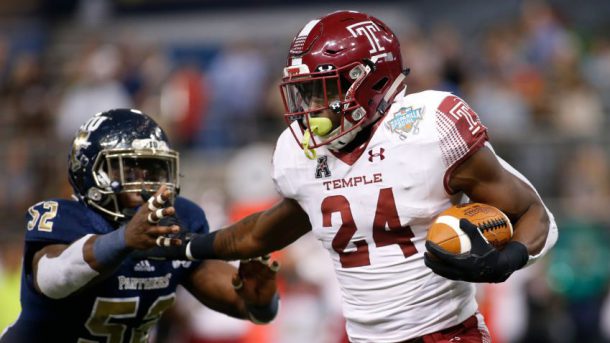 “The future is bright,” first-year coach Geoff Collins said after Frank Nutile threw for 254 yards and a touchdown to lead Temple to a 28-3 victory over Florida International in the Gasparilla Bowl last night.

Nutile teamed with Isaiah Wright on 45-yard TD play in the fourth quarter and also scored on a 4-yard run to give the Owls (7-6) an early lead. He completed passes of 13 and 17 yards to escape a first-and-30 hole before throwing 39 yards to Adonis Jennings to set up another TD.

The victory was the fourth in five games for Temple, which rebounded from a 3-5 start to finish with a winning record. The Owls, American Athletic Conference champions a year ago, won a bowl game for the first time since the 2011 New Mexico Bowl.

“The ceiling is the roof,” Collins said amid a celebration at Tropicana Field.

FIU (8-5) matched a school record for victories in its first year under Butch Davis, the former Miami, North Carolina and Cleveland Browns coach.

“Nobody’s ever happy about losing a game,” Davis said. “But what these kids accomplished this year, nobody thought was even remotely possible.”

The Panthers played most of the night without quarterback Alex McGough, who left in the opening quarter with what Davis said was a fractured collarbone. Maurice Alexander replaced him, but had limited success throwing the ball and was intercepted twice.

Nutile finished 17 of 27 passing with no interceptions and was named game MVP. He threw 13 yards to Keith Kirkwood and 17 yards to Isaiah Wright on consecutive plays before Jennings’ long reception moved the Owls into position to go up 14-3 on David Hood’s 1-yard TD run.

Wright’s TD reception made it 21-3 midway through the fourth quarter. Ryquell Armstead also scored on a 5-yard run for Temple.

“It means a lot. … We’ve been through a lot,” Nutile said. “Our team’s mindset was to go out there and leave it all on the field.”

Collins inherited a program that won the American Athletic Conference in 2016, the Owls’ first league crown since 1967. After a slow start that saw them lose five of eight, the Owls returned from a bye week to win three of four to become bowl eligible. This year’s senior class won 33 games over four seasons, an Owls record.