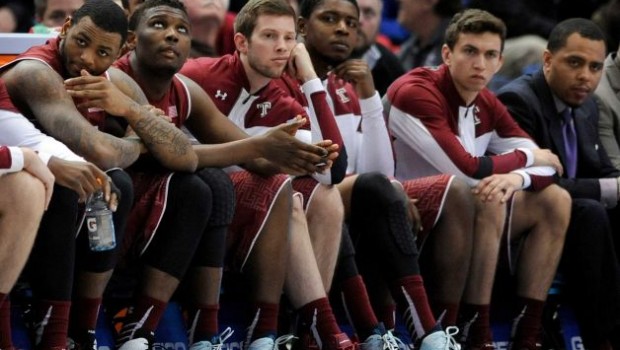 For Temple’s Owls, Saturday’s American Athletic Conference semifinal game with SMU was a chance to settle old scores with a team that had beaten them twice during the regular season.

Make that three in a row.

And as a result Temple is back on the NCAA tournament bubble instead of playing for the automatic berth of a conference champion.

Markus Kennedy scored 12 of his 17 points in the second half to lead No. 20 SMU into the finals of the AAC tournament with a 69-56 win over Temple.

Cannen Cunningham and Yanick Moreira each added 11 points for the Mustangs (26-6), who came into the tournament as the league’s regular-season champions.

Quenton DeCosey had 14 points for Temple (23-10), which lost for the first time in five games and must wait to see if it has done enough to earn an NCAA berth.

SMU trailed by as many as 10 points in the first half, and didn’t lead until Kennedy hit two free throws with 16:40 left in the game

The run was capped by a lob pass from Nic Moore to Ryan Manuel that brought the Mustang’s bench to its feet.

Temple couldn’t get closer than seven points the rest of the way.

SMU will be playing in its first conference tournament final since winning the Southwest Conference in 1988.

SMU outrebounded Temple 45-32, led by Kennedy who had nine and Moreira who chipped in with eight.

Jesse Morgan had 10 points for Temple, but nine of those came in the first half. The first of his two 3-pointers helped Temple jumped out to an early 9-2 lead.

SMU missed its first six shots, but came back from a double-digit deficit to beat the Owls for the third time this season.

They chipped away, tying the game at 26 on a foul shot by Cunningham, before an Obi Enechionia jumper gave Temple a two-point halftime lead.

Nic Moore, the conference player of the year, hit just one of his six shots in the first half and finished with seven.

SMU, which was left out of the NCAA tournament last year after losing to Houston in the AAC’s first round, is a virtual lock this season. Temple also believes it has done enough.

The two teams came in with the highest RPIs in the conference SMU was ranked 14th and Temple was ranked 31.

The Owls had won 11 of its last 13 games, capped by an 80-75 win over Memphis in the quarterfinals Friday.

Jesse Morgan finished with 10 points for Temple. He has scored in double figures in seven of the Owls last 10 games.

Temple’s Jaylen Bond, the American Conference’s leading rebounder at 8.1 per game, showed no ill effects from turning an ankle in the first half of the Owls quarterfinal win over Memphis. But he spent most of this game in foul trouble. He picked up his fourth just three minutes into the second half and finished with four points and five rebounds.