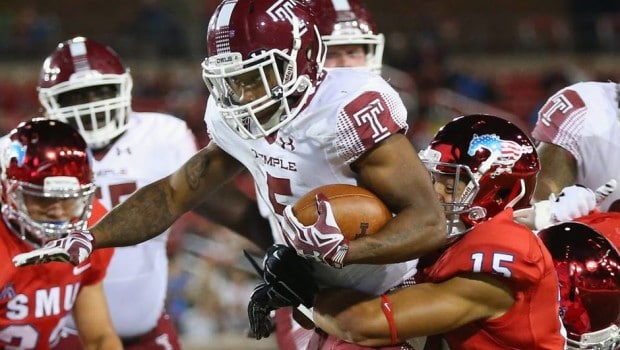 Temple quarterback PJ Walker completed 18-of-25 passes for 268 yards and four touchdowns while the trio of Jager Gardner, Jahad Thomas (above) and Ryquell Armstead rushed for more than 200 yards.

Temple traveled to Texas Friday night and won a shoot-out with SMU.

The Owls ended up winning 60-40, but led only 45-40 with three minutes left in the game before a series of big plays by the Owls.

With 2:46 left in regulation, linebacker Tyler Matakevich batted down an SMU pass on fourth-and-4 on what could’ve been the winning drive. Three plays later, Temple quarterback P.J. Walker responded with a 36-yard touchdown run and, five plays after that, Temple returned an SMU interception for the game-sealing score.

Temple’s team leaders played crucial roles in this game. Matakevich’s deflection was huge, and Walker played arguably his best game of the season. He finished 18-of-25 passing for 268 yards and a season-high four touchdowns.

The Owls are back on track after an emotionally draining loss to Notre Dame last week. Some felt this could be a trap game for Temple, but the offense still controlled the tempo of this one, and the Owls only trailed for 3:39 of the game. Temple has an American championship in its sights, and there’s still hope it could wind up in one of the New Year’s Six.

Walker was efficient, accurate and explosive en route to four touchdowns against no interceptions. His four TDs were his most since he tossed that many against Memphis on Nov. 30, 2013.

One of Temple’s first plays was one of its best. On the Owls’ second snap from scrimmage, from their own 6-yard line, running back Jager Gardner took a handoff up the middle and made the highlight reel. He avoided one diving defender, then sprinted untouched for a 94-yard touchdown. It was Temple’s longest-ever play from scrimmage.

Beside Matakevich’s deflection, the key point might’ve been right at the end of the first half. SMU took a 17-14 lead, but the Owls responded by going on a 10-play, 75-yard touchdown drive to regain the lead just before halftime. The Mustangs’ lead lasted less than four minutes, and they never regained it. This might’ve been a different game if not for that change in momentum.