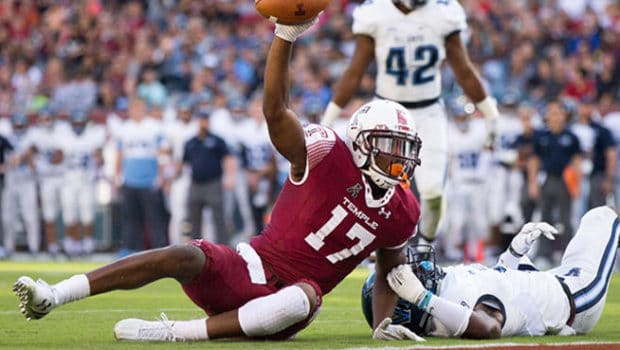 Aaron Boumerhi kicked a tie-breaking field goal late in the fourth quarter as Temple edged Villanova 16-13 in the Mayor’s Cup battle before 35,117 at the Linc.

Boumerhi’s 49-yard field goal with a minute to go came after Villanova scored 13 unanswered points to tie the game at 13-all with 3:29 remaining.

Austin Jones kicked a 22-yard field goal late in the first quarter and Nick Shargaran a yard for a score late in the second to give the Owls (1-1) a 10-0 lead at halftime.

Boumerhi made a 44-yard field goal early in the third quarter to stretch it to 13-0.

But the Wildcats (1-1) came alive late in the third to score on three consecutive drives, beginning with Drew Kresge’s 44-yard field goal to make it 13-3. In the fourth, Zach Bednarczyk capped a 91-yard drive with a 10-yard scoring pass toTaurus Phillips. A second Kresge field goal tied it at 13 with 3:29 left.

Bednarczyk finished with 382 yards for the Wildcats.